Sun Belt Conference Player of the Year DeVante’ Jones said Monday he will withdraw from the NBA draft and play at Michigan in 2021-22 after transferring in May.

The 6-foot-1 guard told ESPN he’s returning to school to prove his value at a Power 5 school.

“I decided to withdraw from the NBA draft because there’s a stigma of the level I played at my three years at Coastal Carolina University,” Jones told ESPN. “Being able to transition to the Big Ten and play under Juwan Howard will be the perfect opportunity for me to showcase my abilities on a higher stage.”

–St. John’s forward Julian Champagnie announced that he will return for his junior season.

The All-Big East guard and league Most Improved Player averaged 19.8 points and 7.4 rebounds in 25 games (24 starts) last season for the Red Storm. 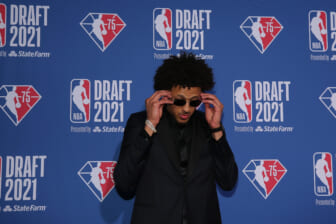 “This was an extremely difficult decision,” Champagnie told ESPN on Sunday. “It’s been a lingering thought for months now. I enjoyed the process, but I didn’t put myself in the spot I wanted to, partially because of a wrist injury I suffered early on that set me back mentally and physically.”

–West Virginia guard Miles McBride will keep his name in the 2021 NBA Draft after two seasons with the Mountaineers.

McBride made second team All-Big-12 after scoring 15.9 points per game and averaging 4.8 assists and 3.9 rebounds in 29 games (28 starts) last season.

“The main reason was the feedback I got from the NBA’s undergraduate advisory committee. Being drafted in the late first to early second round is what I’ve heard the most,” McBride told ESPN.

–Kansas forward Jalen Wilson will return for his sophomore season.

The deadline for players to withdraw from the draft is Wednesday.