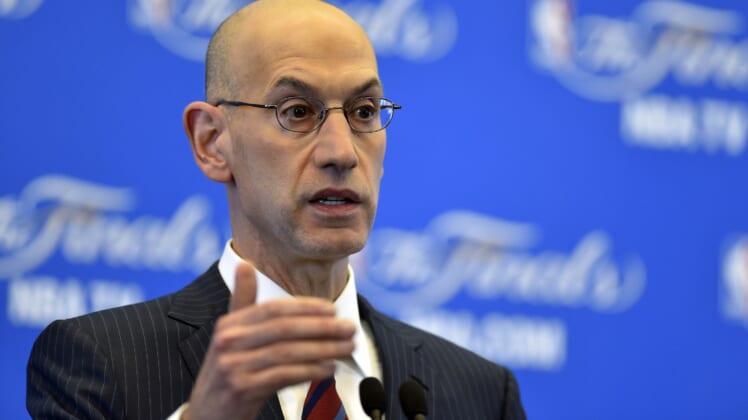 As the NFL finds itself embroiled in yet another national anthem controversy with the White House and other prominent figures chiming in, the NBA world is preparing for the Finals.

As an entity that has continued to grow leaps and bounds in recent years, the NBA’s forward-thinking mentality and willingness to let players be individuals has played a role in its popularity.

This started under former NBA Commissioner David Stern, but has increased even more with a progressive Adam Silver manning that post in recent years.

With the NFL’s latest controversy being brought to a whole next level on Wednesday, Silver took time out of a speech at the Sports Business Awards to chime in.

He didn’t hold back. Silver started his comments by telling executives that it’s no longer acceptable to “stick to sports.”

“Sports has never been more important than it is now. And what we do matters. “Use sports to build bridges and bring people together.”

According to SportsBusiness Daily, Silver went on to say “it was important for the league to embrace its role as a disruptor, both technologically and societally” before noting that “we have an ownership group that is already accustomed to being discruptors in their own careers.”

From deciding to move the All-Star Game from North Carolina during the entire LGBT controversy a couple years back to encouraging NBA players to speak out on hot-button topics, Silver has not been afraid to go against the grain.

His leadership could be one of the primary reasons that the NBA’s popularity has been taken to a whole new level in recent years.

While the NFL remains bogged down in collective bargaining issues and off-field drama, the Association’s focus has been molding a tremendous on-court product while enabling individuals to actually be individuals.

Silver’s latest comments represent this to a T.