The Miami Heat got rocked by the Milwaukee Bucks in Game 3 on Thursday, and NBA Twitter pulled no punches in blasting the reigning East champs.

The Miami Heat essentially had their playoff lives on the line on Thursday, but got destroyed on their home court 113-84 by the Milwaukee Bucks in Game 3 of their opening-round series.

As the reigning NBA finalists got walloped in front of friendly fans, Twitter was aflame with reaction to the Heat’s debacle, which featured bricklaying on offense, waning defense and a shell of the squad that made an inspired run in the Orlando bubble.

Now just one loss away from being abruptly eliminated, the Heat have a lot to figure out just to avoid being swept, much less make this matchup competitive.

Even though Miami struggled for buckets throughout Thursday night and shot 38.1% overall, its trademark defense was still evident throughout the first half. Despite scoring only 14 first-quarter points, the Heat trailed by 13 at the break, which gave them a chance.

Unfortunately, perpetually poor execution on offense and lapsed form on the other end of the court led the Bucks to win the third quarter 37-24, which put Game 3 out of reach for the hosts.

It’s quite clear that Bam Adebayo needs to become a more assertive force on offense, and that Jimmy Butler could stand to be a more dangerous 3-point shooter to help the team’s spacing. 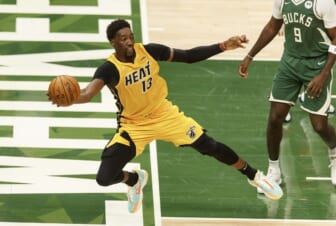 Also Read:
What has gone wrong for Miami Heat vs. Milwaukee Bucks

Giannis Antetokounmpo and the Bucks deserve credit for the incredible job they did to shut the Heat down. However, Miami should’ve at least kept this contest close with so much at stake, but failed to do so.

Thus, here we are: Some of the reactions to the Heat’s inexcusably flat performance from Thursday: