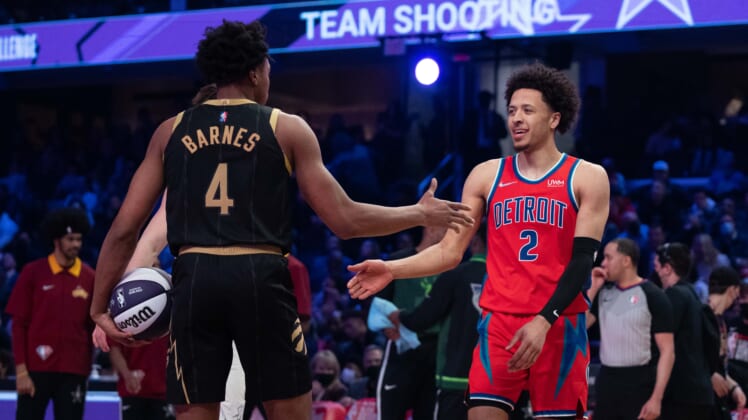 After a competitive season out of the first-year players, few could agree on who the Rookie of the Year should be, let alone the entire NBA All-Rookie team. It’s not for a lack of talent, as the 2021 NBA Draft class was deeper than expected, but it’s just that there are so many viable candidates to fill out the first and second-team honors.

Every year during the Conference Finals of the NBA Playoffs, we learn the results of the NBA All-Rookie team. On Wednesday night, shortly before the Dallas Mavericks could tip-off against the Golden State Warriors, the NBA finally revealed the All-Rookie squad, and there were a few surprises and notable snubs. We break it all down below.

Here is the full first-team All-Rookie squad, as revealed by the NBA.

It’s fairly obvious who was making the first team. Each of these players looked to have a chance at winning the NBA’s Rookie of the Year award before Scottie Barnes was named the winner. As the NBA noted, it was the closest ROY race in the Association’s history.

Related: 5 NBA Draft trades we could see during the 2022 event

Here is the All-Rookie second team, as the NBA announced earlier today, listed in no particular order.

Who got snubbed from the NBA All-Rookie team?

Seeing Josh Giddey not sneak into the first team is a bit of a surprise after his sensational performance for the Oklahoma City Thunder, racking up four triple-doubles, while steadily improving as a shooter. At just 19, Giddey’s all-around game is already impressive, I can’t wait to see him surrounded by more talent with OKC.

With Giddey playing 10 fewer games than others who did make the first team, voters clearly valued availability and dependability when making their decisions.

Two of the more noticeable snubs who missed the team altogether are Davion Mitchell of the Sacramento Kings and Jonathan Kuminga of the Golden State Warriors.

Both players received strong consideration, just missing the cut for the second team.

In Kuminga’s case, his role on a deeply talented Warriors roster certainly played a factor, only seeing 16.9 minutes per game as a rook.

Meanwhile, Mitchell was stuck behind Tyrese Haliburton and De’Aaron Fox for much of the season, which was expected coming into the season.

Here are the full results of the All-Rookie voting.