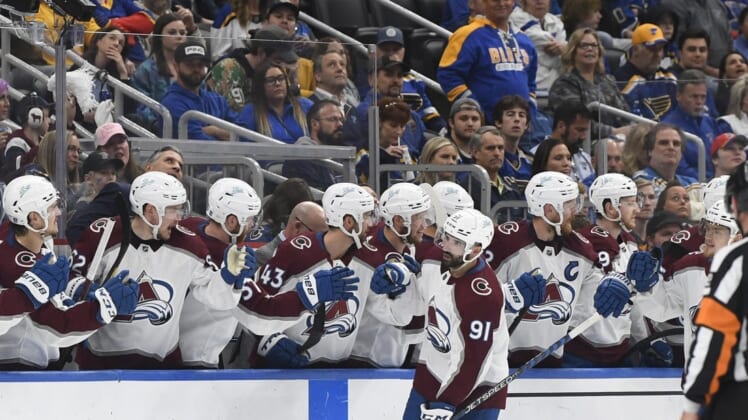 Nazem Kadri scored a hat trick to lift the visiting Avalanche past the St. Louis Blues 6-3 on Monday, giving Colorado a commanding 3-1 lead in the second-round Western Conference playoff series.

Kadri became the focal point for Game 4 after crashing into St. Louis goaltender Jordan Binnington along with Blues defenseman Calle Rosen in Game 3. The incident knocked Binnington out for the series with a lower-body injury and triggered online threats to Kadri.

In addition to Kadri’s four points, the Avalanche got goals from Erik Johnson, Devon Toews and Mikko Rantanen. Darcy Kuemper made 17 saves for the win.

David Perron scored twice for the Blues and Pavel Buchnevich had a goal and an assist. St. Louis goalie Ville Husso allowed five goals on 36 shots.

Game 5 of the best-of-seven series will be played Wednesday in Denver.

The Avalanche controlled much of the first period while outshooting the Blues 15-3, but St. Louis escaped with a 1-0 lead. Perron gave the Blues their advantage with a backhand move cutting across the crease at 5:07.

Colorado used a three-goal flurry in less two minutes to seize momentum in the second period.

Johnson started the surge with a point shot through traffic at 2:44. Kadri then broke in on right wing to convert a two-on-two rush at 4:07.

Toews scored just 19 seconds later by converting a St. Louis offensive zone turnover into a goal from the high slot.

Trailing 3-1, the Blues sought retribution against Kadri. First Buchnevich bumped him down, then Perron cross-checked him to the ice and jumped him.

The Avalanche peppered Husso during the resulting five-on-three power play, and they made it 4-1 when Kadri scored from the right circle shortly after that advantage expired.

The Blues cut the deficit to 4-3 with two power-play goals in the final 2:58 of the period. Perron scored his ninth goal in 10 playoff games this year with a blast from the left circle. Buchnevich chipped in a rebound during a goalmouth scramble with 33 seconds left before the second intermission.

Kadri struck again with a snap shot from the left circle 9:38 into the third period to put Colorado up 5-3. Rantanen added an empty-net goal with two seconds remaining.