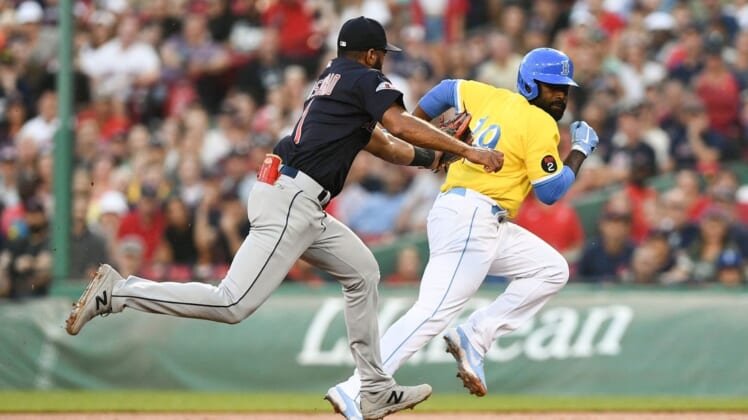 Josh Naylor hit a tiebreaking homer with one out in the ninth inning as the Cleveland Guardians capitalized on shoddy defense by the host Boston Red Sox and recorded a 7-6 victory Wednesday night.

Naylor snapped a 6-6 deadlock when the left-handed hitting first baseman hammered a 2-0 slider by Tanner Houck (5-4) over the Green Monster seats for his 15th homer.

Naylor’s fifth homer in 18 games this month helped Cleveland win for the seventh time in 10 games on a night when it squandered leads of 3-0 and 5-3.

Myles Straw hit a tying double in the eighth off John Schreiber (3-2) two batters after first baseman Franchy Cordero committed his third error of the night by making an errant throw on a grounder by rookie Nolan Jones. Cordero was charged with two errors in Cleveland’s three-run second when he bobbled Jones’ grounder and also made an errant toss.

Straw also hit an RBI double in the second following Cordero’s two misplays and Owen Miller scored on a groundout after the errors allowed him to take third.

Enyel De Los Santos (2-0) got the final out of the seventh and pitched the eighth. Emmanuel Clase pitched a 1-2-3 ninth for his 21st save in 23 chances and 15th in a row.

Bobby Dalbec homered twice and drove in a season-high five runs but the Red Sox dropped to 2-11 in its past 13 games despite the third baseman’s fourth career multi-homer game.

Dalbec hit a two-run drive over the Green Monster on the first pitch he saw in the second from Cal Quantrill after the Red Sox faced a three-run deficit. Dalbec lifted a sacrifice fly in the fourth to get Boston within 5-4 and then hit his second two-run homer into the center field seats with two outs in the sixth to put the Red Sox up 6-5.

Cordero contributed an RBI double ahead of Dalbec’s sacrifice fly.