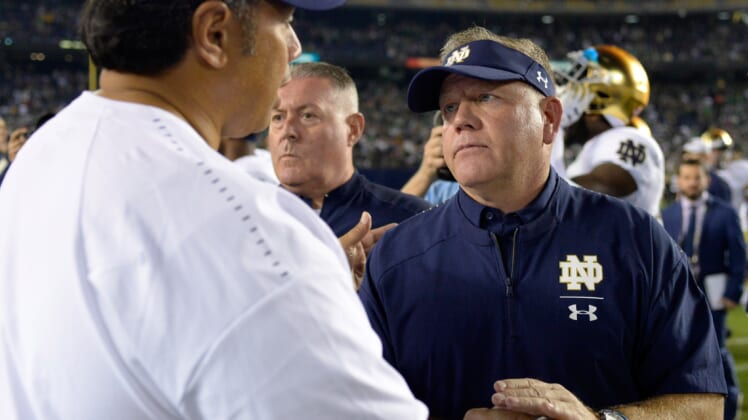 The annual game between the Navy Midshipmen and Notre Dame Fighting Irish has been one of the best traditions in college football for decades. Unfortunately, due to the COVID-19 pandemic, the iconic rivalry game is canceled for the 2020 season.

Notre Dane joined the ACC conference exclusively for the upcoming football season. When the conference released its 2020 football schedule, with teams only allowed to play one non-conference opponent, Navy wasn’t on Notre Dame’s listed opponents.

Before the COVID-19 pandemic rocked the entire globe, Notre Dame and Navy were scheduled to play this year in Dublin. The iconic rivalry would come to Ireland, creating an incredible opportunity for both programs and a memorable trip for student-athletes.

Unfortunately, that all changed due to the coronavirus. By April, rumors circulated that the game would be moved and the decision was made in June. Both schools hoped playing the game in Maryland would be enough, but the move to conference-only schedules pushed Notre Dame to join the ACC.

As a result, a rivalry game that has been played every year for nearly a century is canceled and we won’t see it return until 2021.

Notre Dame is replacing it with a matchup against Western Michigan, a move that will disappoint many football fans across the country.

While this rivalry might be off for the 2020 season, there is still hope for another. Navy’s athletic director is determined to have an Army-Navy game this season, even if it’s the only game both teams play.