Nats look to put distractions aside when Cubs come to town 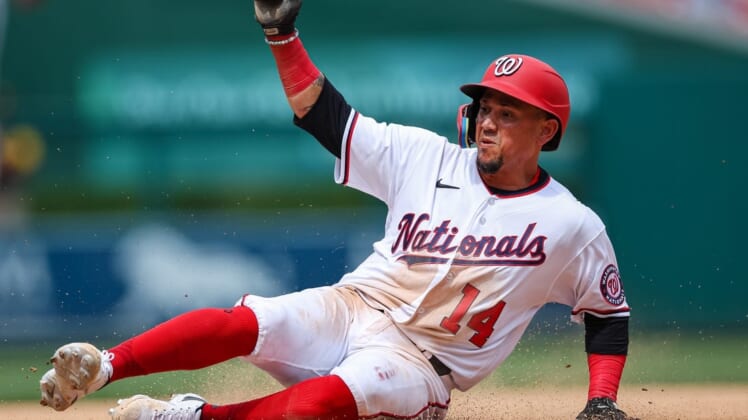 Much of the clamor is bound to die down now that the Washington Nationals have moved on after a visit from the San Diego Padres.

Yet with an evolving lineup and a new opponent arriving, it will be important for the Nationals to generate energy when a series against the Chicago Cubs begins Monday night in Washington.

This is a matchup of two of the four National League teams yet to reach the 50-win mark. The Cubs won two of three games against the Nationals last week in Chicago.

The Nationals have lost nine of their last 11 games, but there might be fewer distractions after the conclusion of a three-game series with the Padres. San Diego arrived with two core members of the Nationals who had been traded earlier this month in outfielder Juan Soto and first baseman Josh Bell.

“I thought we did a good job of keeping them (from homering) and handled them really well,” Nationals manager Davey Martinez said of the way Washington pitchers dealt with their ex-teammate sluggers.

The Cubs lost 8-5 to the Cincinnati Reds on Sunday. It was a disjointed series, with the opener Thursday night in Iowa for the “Field of Dreams” game and then a day off Friday before the final two games in Cincinnati.

The Cubs have won six of their last nine games.

When Chicago and Washington met last week, it was the Cubs debut for outfielder Franmil Reyes. Since his acquisition from the Cleveland Guardians, he has made an impact in a short time and could be settling in.

He homered this weekend at Cincinnati and could be an important part of Chicago’s lineup for the final weeks of the season. Reyes has at least one hit in each of the four games he has played with the Cubs.

“He’s got big-time power,” Ross said. “This guy can hit them out anywhere.”

There wasn’t as much optimism about offense coming from the Nationals, who were without a walk or an extra-base hit in Sunday’s 6-0 loss to San Diego.

But maybe there’s something to look forward to as postgame reports surfaced that prospect C.J. Abrams, a shortstop, would be one his way to the big league club from Triple-A Rochester in order to play Monday night.

Washington hasn’t had infielder Luis Garcia in the lineup since Friday as he tries to recover from a groin injury. He could be going on the injured list, Martinez said.

The Cubs will go with right-hander Marcus Stroman (3-5, 4.20 ERA) as their starting pitcher. He has only one decision (a victory) in his last six starts, though in two appearances this month he has surrendered two home runs in each game. That’s the most homers he has yielded in a two-game stretch this year.

Stroman is 1-1 with a 5.17 ERA in six all-time starts versus the Nationals.

Right-hander Josiah Gray (7-8, 4.81) gets the call for the Nationals. He’s 0-3 in his last five starts, with Washington pulling out only one of those games.

In his only appearance and start against the Cubs, he gave up two runs in 6 1/3 innings, giving up Nico Hoerner’s home run that sparked a Chicago rally last week.