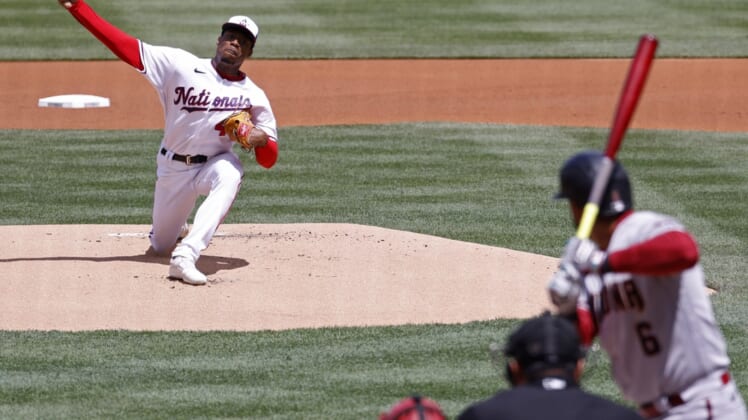 Starting pitcher Josiah Gray set the tone on a combined six-hitter as the Washington Nationals defeated the visiting Arizona Diamondbacks 6-1 on Monday afternoon in the opener of a day-night doubleheader.

Victor Robles and Cesar Hernandez had back-to-back run-scoring doubles in the Nationals’ two-run fifth inning as they took the lead for good in chilly conditions.

Diamondbacks starter Madison Bumgarner, who took a no-hitter into the fifth inning, was the hard-luck loser despite working five innings without giving up an earned run.

Daulton Varsho hit a home run in the third inning for Arizona’s run. It was the game’s first hit. Two of Varsho’s six hits this season are homers.

Bumgarner (0-1) struck out the first two batters in the fifth. But second baseman Ketel Marte’s fielding error extended the inning.

Robles, who managed just his second hit of the season, and Hernandez both came through as the Nationals went ahead.

The doubles were the only hits surrendered by Bumgarner, who walked four and struck out five.

Washington’s Maikel Franco provided a two-out RBI single in the sixth to extend the gap to 3-1.

Bell went 2-for-4, while and Arizona’s David Peralta and Seth Beer each had two hits.

Washington avoided what would have been its second three-game losing streak of the season. The Diamondbacks lost for the third time in their last four games.

The paid attendance of 9,261 marked the smallest home crowd in Nationals’ history, other than 2021 when there were COVID-19 restrictions.

The first game of the doubleheader was a makeup from Monday night’s weather-related postponement.