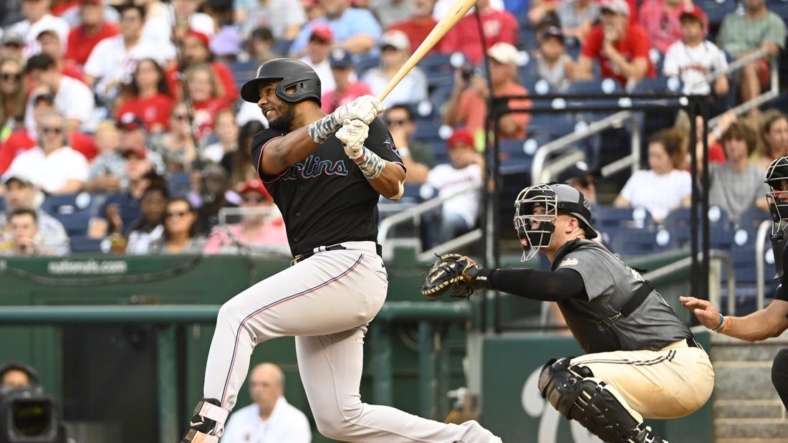 The Washington Nationals hit four solo home runs to power their way to a 5-3 victory over the visiting Miami Marlins on Saturday.

Lane Thomas, Luke Voit, Victor Robles and Alex Call all homered for the Nationals (51-94), who knocked off the Marlins (59-87) for the second straight day.

After Thomas homered to lead off the bottom of the first, the Nationals doubled their lead in their next at-bat. Luis Garcia led off with a double to left and promptly scored when Riley Adams doubled to right field for a 2-0 lead.

Adams was the last hitter Marlins starter Trevor Rogers faced, as he exited the game with a lat injury. He allowed two runs on three hits with a strikeout and a walk on 32 pitches before being relieved by Jeff Brigham.

The Marlins pulled to within 2-1 in the third when Brian Anderson’s single to right scored Lewin Diaz. Diaz had led off with a single and advanced to second on Charles Leblanc’s single and took third when Joey Wendle grounded into a double play.

The Nationals got the run back in the bottom of the inning when Voit smacked a solo home run to center for a 3-1 advantage.

After the Marlins tied the game 3-3 in the fourth on Jerar Encarnacion’s two-run homer to left, Robles got the lead right back for the Nationals in the bottom of the inning with a solo home run off Brigham (0-1), who didn’t return for the fifth.

Cole Sulser relieved Brigham and immediately surrendered a solo home run to Call to extend the Nationals lead to 5-3.

Nationals starter Eric Fedde was pulled after allowing three runs on seven hits with three strikeouts and no walks in four innings. Hunter Harvey (2-1) picked up the win by pitching a scoreless fifth before Erasmo Ramirez did the same in the sixth and seventh.

Carl Edwards Jr. took care of the eighth before Kyle Finnegan struck out the side in ninth for his 10th save of the season.

Jacob Stallings and Leblanc each had two hits for the Marlins.