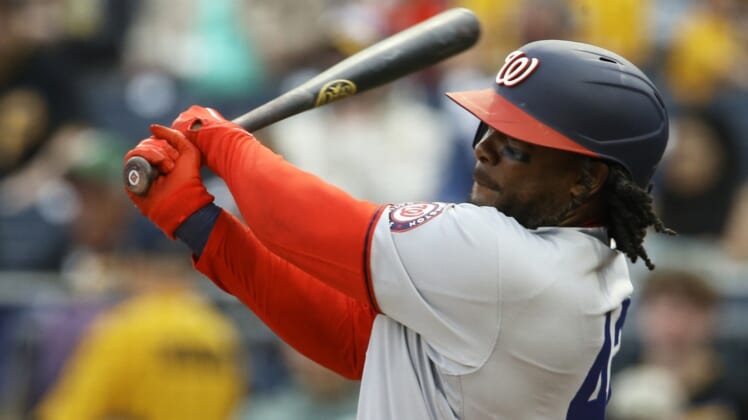 Nelson Cruz and Josh Bell each drove in three runs Friday to lift the visiting Washington Nationals over the Pittsburgh Pirates 7-2.

The teams have split the first two games of a four-game series.

Cruz hit two RBI singles and an RBI grounder, Bell a two-run single and an RBI single, and Lane Thomas added a run-scoring double for the Nationals.

Hoy Park supplied the runs with a two-run single for the Pirates, who had won three of their previous four.

Pirates catcher Roberto Perez left for a pinch-hitter in the second after he took a pitch off his left knee area while behind the plate in the top of the inning. The team said he had a left quadriceps contusion.

Cruz extended it to 3-0 in the second when his single to left drove in Alcides Escobar, who had walked, stolen second and moved to third on Soto’s groundout.

Pittsburgh cut its deficit to one in the home half of the second. Yoshi Tsutsugo singled to center to lead off the inning, and Ben Gamel followed with a walk. With two outs, Andrew Knapp, pinch-hitting for Perez, walked to load the bases. Park’s single to left scored two to make it 3-2.

In the fourth, Hernandez singled to left with one out, went to third on Soto’s single to center and scored on Cruz’s grounder for a 4-2 Nationals lead.

In the fifth, Washington’s Yadiel Hernanez doubled to right-center with one out, went to third on Maikel Franco’s flyout to right and scored on Thomas’ double to left-center.

Bell’s bases-loaded single with one out in the sixth drove in two more runs and put the game away at 7-2.