Nationals pound out 16 hits in rout of Rockies 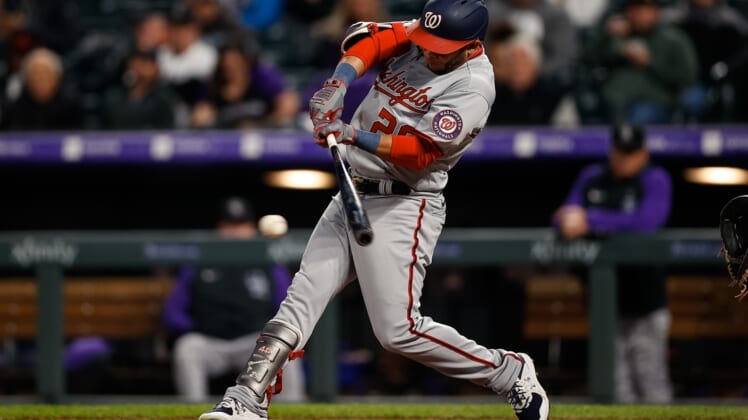 Josh Bell smacked a three-run homer and Juan Soto launched a solo shot as the Washington Nationals routed the Colorado Rockies 10-2 on Tuesday night in Denver.

Keibert Ruiz had three hits and three RBIs and Yadiel Hernandez had three hits and drove in two as Washington won for the third time in four games following an eight-game losing streak. The Nationals have reached double digits in all three of the victories.

Right-hander Erick Fedde (2-2) put together his best performance of the season. He allowed one run, six hits, two walks and struck out three in seven innings.

C.J. Cron slugged his National League-leading ninth homer of the season for the Rockies. Cron went 3-for-3 with a walk but Colorado had its three-game winning streak halted.

Rockies right-hander German Marquez (0-2) struggled badly and gave up seven runs and 10 hits in five innings. He struck out five and walked two.

Washington began its assault in the third inning when Escobar singled and Cesar Hernandez was hit by a pitch. One out later, Bell went the opposite way with an 0-1 fastball by Marquez and deposited the ball over the fence in left for his third blast of the season and a 3-0 lead.

Colorado plated a run in the bottom of the frame on a fielder’s choice by Randal Grichuk, and Washington got it back in the top of the fourth on a sacrifice fly by Victor Robles.

Soto led off the fifth by sending a first-pitch change-up 414 feet over the fence in left center for his fifth homer of the campaign. Ruiz ripped a two-run single to center later in the inning to make it 7-1.

In the seventh, Yadiel Hernandez delivered a two-run double to center to make it 9-1.

Cron hit a 415-foot blast to left off Nationals right-hander Erasmo Ramirez with two out in the eighth.

Ruiz added an RBI single in the ninth for Washington.