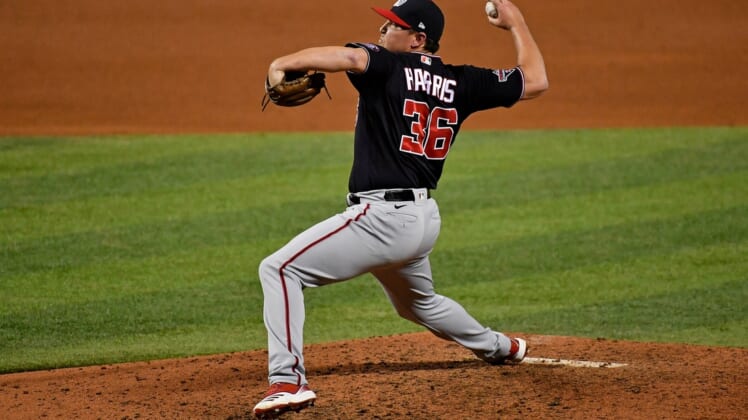 Washington Nationals right-hander Will Harris will undergo further evaluation after being diagnosed with a blood clot in his pitching arm.

Nationals manager Dave Martinez said Friday that Harris sensed there was a problem while pitching in a ‘B’ game on Saturday.

“He felt weird his last outing,” Martinez told reporters. “So, we kind of backed off a little bit, got an MRI and in the arm was a little small blood clot.”

The 36-year-old is slated to travel to St. Louis to be examined by specialist Dr. Robert Thompson.

“For me, it’s hard, because medically I don’t know the extent of what that is,” Martinez said. “But I know it’s something that is serious. We need to take care of it — take care of it as soon as possible.”

Harris last pitched in an exhibition game on March 9 when he tossed a scoreless inning against the Houston Astros.

Martinez said that Harris was handling the situation well.

Harris is entering the second season of a three-year, $24 million deal. He was slated to be one of the Nationals’ late-game relievers, along with left-hander Brad Hand and right-hander Daniel Hudson.

Harris was 0-1 with a 3.06 ERA in 20 relief appearances for Washington last season.

He was an All-Star for the Astros in 2016 and enjoyed his best all-around season in 2019 when he had a 1.50 ERA in 68 appearances. Ironically, he served up the go-ahead two-run homer to Washington’s Howie Kendrick in the seventh inning of Game 7 of the 2019 World Series and the Nationals went on to a 6-2 victory.