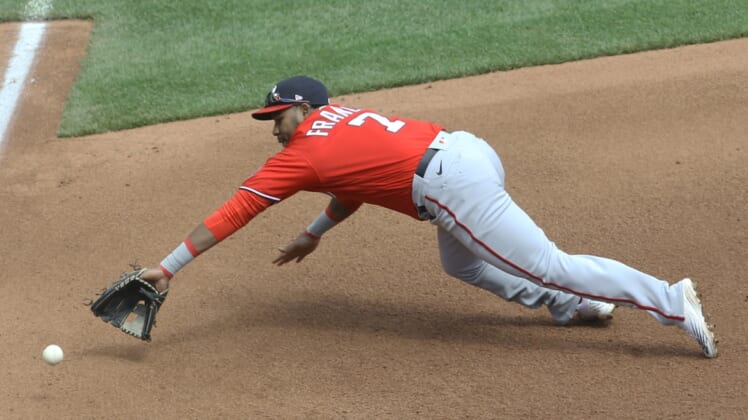 Washington Nationals manager Davey Martinez has been generally upbeat despite his team’s slow start, but that doesn’t mean he’s content.

Martinez is looking for sharper play from his squad, beginning Monday when the Nationals open a four-game series against the visiting Arizona Diamondbacks.

Washington is eager for a fresh start after losing three of four to the Pittsburgh Pirates. The Nationals led 3-0 after two innings on Sunday before losing 5-3.

“We should have put them away early,” Martinez said. “We’ve got to finish games, keep working good at-bats throughout the whole game and put teams like that away.”

Martinez was not pleased with his team’s defensive performance in the loss. In addition to a costly passed ball in the seventh inning, third baseman Maikel Franco committed three errors.

“Those little things, we’ve got to clean up,” Martinez said. “We can’t give teams extra outs. We’re not going to win games like that.”

The Nationals will turn to right-hander Josiah Gray (1-1, 4.00 ERA) against the Pirates. Gray bounced back from a shaky season debut with a strong performance against the Atlanta Braves last Wednesday.

“It’s really exciting to see him grow, and I’m pumped to see what happens next for him,” said Nationals first baseman Josh Bell.

The native New Yorker is making his first career appearance against Arizona. He went 2-2 with a 5.31 ERA in 12 starts last season for the Nationals.

Arizona is looking to ignite its offense after losing two of three against the New York Mets over the weekend. The D-backs scored a total of six runs in the series.

Arizona was held to five hits and went 1-for-9 with runners in scoring position in a 5-0 loss on Sunday.

“We can’t get any momentum going,” Arizona outfielder Pavin Smith said. “We get guys on base and it seems like everybody wants to try to get the big hit and that makes it worse. We’ve just got to keep grinding, keep chugging away at each individual at-bat to try to get better. And try not to press as much.”

One bright spot from the weekend was the performance from closer Mark Melancon. The veteran struck out two of the three batters he faced on Saturday for his first save this season.

Arizona will turn to left-hander Madison Bumgarner (0-0, 2.25) for the series opener.

Bumgarner received a no-decision after giving up one run and five hits over five innings against the Houston Astros last Tuesday. He walked two and struck out two.

Franco is 6-for-14 with a home run and two doubles against Bumgarner, who is 4-5 with a 2.63 ERA in 11 career starts versus Washington. He has only faced the Nationals once since 2016, a win last season.

In seven career starts at Nationals Park, the four-time All-Star is 2-4 with a 3.83 ERA.

Bumgarner is facing a Washington lineup that is strong at the top of the order but lacking production in the bottom half.

One encouraging note for the Nationals on Sunday was the play of center fielder Victor Robles. He entered the day hitless in his first 18 at-bats before delivering a two-run single in the loss to Pittsburgh.