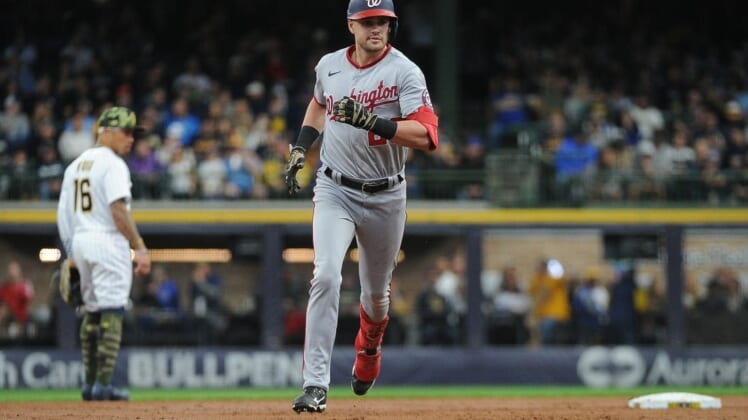 Right-hander Aaron Sanchez will get the nod as the Washington Nationals look to avoid a three-game sweep Sunday against the Brewers in Milwaukee, but he’ll need his teammates to generate some offense to have any chance at success.

The Brewers won the second game of the weekend series 5-1 on Saturday after winning the opener 7-0. Milwaukee is 18-6 in the last 24 games against the Nationals.

Brandon Woodruff held the Nats to one run on five hits in six innings Saturday night, striking out six with no walks. Andrew McCutchen and hot-hitting Luis Urias homered for Milwaukee, which moved to a season-high 12 games above .500 at 26-14.

The only run for the Nationals in the series came on Lane Thomas’ solo homer in the third inning Saturday. Washington, which stranded eight runners Saturday, has drawn just two walks in the series.

Washington also hit into two double plays Saturday, bringing their season total to 42, the most in the major leagues.

“It’s tough, it really is,” Nationals manager Dave Martinez said of his team’s lack of offense. “We had a couple chances where we get bases loaded, or we get a guy on first base and we hit into a couple double plays today. The bases-loaded strikeout there. When you’re not scoring any runs and you get guys on base, everything magnifies.”

Washington has been held to one run or less in 12 games this season.

The task doesn’t get easier against Peralta, who is coming off one of his best starts of the season. He allowed just two hits over seven scoreless innings with 10 strikeouts and a walk in a 1-0 victory against Atlanta on Monday.

“Freddy’s a good pitcher,” Brewers manager Craig Counsell said after that performance. “A couple uneven starts at the beginning, but I think he’s kind of reined in his breaking ball a little better here. That’s just kind of the equalizer. … It makes his fastball better.”

“I thought since some early starts, he missed by pretty good margins with his breaking ball, kind of free pitches almost for hitters,” Counsell said. “There’s none of that any more.”

One of the keys for the Nationals is to get to Peralta early. Of the 14 runs he’s allowed, 10 have come in the first inning and three in the second.

The Brewers have been inconsistent at times offensively, including being shut out four times, but have several players getting on track at the plate.

Urias, who has moved from third base to shortstop with Willy Adames on the IL, has reached base safely in all 16 games since coming off the injured list.

Hunter Renfroe has hit safely in eight of his past nine games, hitting .424 (14 for 33) with three homers and eight RBIs.