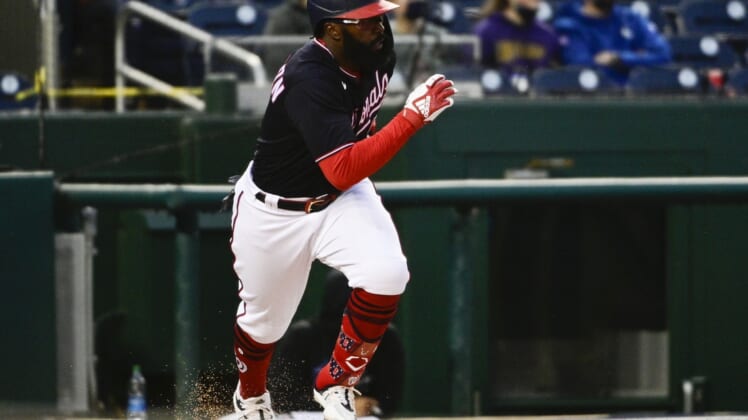 Kyle Schwarber hit a two-run homer in the bottom of the tenth and the Washington Nationals beat the visiting Miami Marlins 2-1 on Friday night.

Josh Bell started the inning on second base and Schwarber hit an 0-1 fastball to right-center off Yimi Garcia (2-2), for his second walk-off homer of the season.

The Marlins took a 1-0 when Garrett Cooper’s single scored Jose Devers in the top of the tenth.

Jon Lester pitched five scoreless innings in his Washington debut after being reinstated from the injured list on Friday. He allowed five hits and two walks while striking out one on 70 pitches.

Marlins starter Pablo Lopez shut out the Nationals for seven innings. He allowed six hits and two walks, while striking out two over 79 pitches.

The 37-year-old Lester, who signed a one-year contract with Washington in January, was one of nine players quarantined before the season because of COVID-19 protocols after either testing positive or having contact with someone who did.

The Nationals had runners on first and third with one out in the first inning, but Starlin Castro flied out, Josh Bell walked to load the bases, and Schwarber popped out.

Then in the fifth, the Marlins had first and second with one out, but Cooper’s smash was fielded by shortstop Trea Turner and became a 6-4-3 double play.

The Marlins got a runner to third in the sixth but Isan Diaz grounded out.

The Nationals had first and third with one out against Lopez in the sixth, but Castro grounded into a double play, Washington’s third of four in the game.

Victor Robles singled to open the eighth, but pinch-hitter Andrew Stevenson hit into a double play.

Miami was unable to cash in a leadoff walk in the ninth, and the Nationals couldn’t get Hernandez home when he singled with one out and stole second.