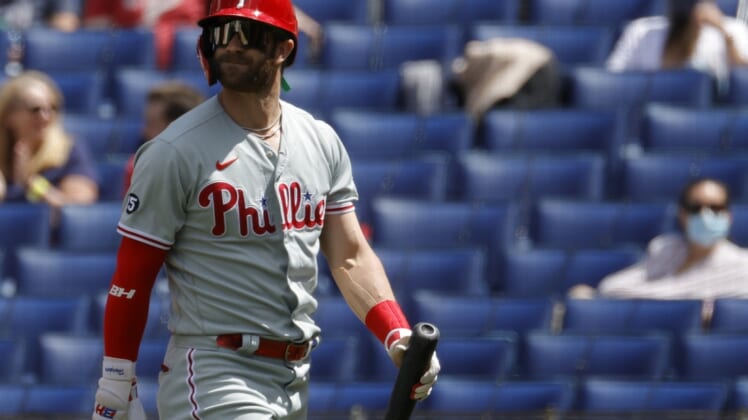 May 13, 2021; Washington, District of Columbia, USA; Philadelphia Phillies right fielder Bryce Harper (3) walks back to the dugout after striking out against the Washington Nationals in the sixth inning at Nationals Park. Mandatory Credit: Geoff Burke-USA TODAY Sports

The National League East was projected to be the stiffest division in MLB this season, which it has been – depending on the way you view the situation. On one hand, the first-place New York Mets are just four games up on the last-place Washington Nationals, meaning the competition is tight. In between them are the Philadelphia Phillies, Atlanta Braves and Miami Marlins.

Currently, the best record in the division is just three games above .500 (Mets), and all five teams have reason to be concerned about how their season has gone to at least some extent.

Here’s a ranking of how concerned the National League East competitors should be.

No team should be jumping with joy over an 18-22 start, but the Marlins also shouldn’t be pushing the panic button. This team is designed to yield positive results over 162 games, not 40.

The Marlins’ backbone is their pitching staff, which is loaded with an abundance of blossoming arms like Sandy Alcantara, Pablo Lopez, Trevor Rogers and Sixto Sanchez (when he returns to the big leagues). Manager Don Mattingly’s offense has to pick up the slack, as they’ve been severely reliant on veterans carrying the load. Individuals like Brian Anderson and Garrett Cooper, who have been catalysts for the offense in recent memory, have to get on base more.

Miami is in the thick of the division race. It’s clear what has to improve and conceivable to think it will. A little more offense and the pitching staff continuing to improve.

It feels like the Mets are 10 games below .500 with the injuries and high-profile struggles they’ve endured of late. On the contrary, they’re in first place in the National League East with the most pivotal element of their ball club going into this season answering the bell. That being their starting rotation.

Jacob deGrom has been Jacob deGrom — an invincible ace. Marcus Stroman has been highly efficient. Taijuan Walker has impressed, posting a 2.05 ERA across eight starts. The issue has been manager Luis Rojas’ lineup.

The likes of Jeff McNeil, Pete Alonso, Dominic Smith and Francisco Lindor hitting no better than .248 and in Lindor’s case hitting .185 is far from ideal. That said, these are proven commodities capable of much more at the plate. The Mets’ offense will get better. That said, it has to get back to its old ways for New York to make the playoffs.

The Phillies began the season hot, then had a bad week and have since played .500 baseball. Talent-wise, they should be contending for the postseason. The issue has been execution and consistency. To date, little has changed for the Phillies.

The offense has been hit-and-miss, the rotation has been all over the place and the Phillies look like a continuation of their 2020 selves. All that said, they have the talent in the building to break through. Bryce Harper, J.T. Realmuto and Rhys Hoskins headline a more-than-capable Phillies positional depth chart. Meanwhile, Aaron Nola and Zack Wheeler spearhead a win-now rotation.

Philadelphia has to perform better in divisional play. It has been the same product for three years. Can the team find crafty ways to win games and simply play up to its billing?

It’s always worth mentioning that the 2019 World Series champion Nationals began the season 19-31. Case in point, the MLB season is a long grind. At the same time, the Nationals have been a rollercoaster this season.

There have been moments where their offense is great and moments where it has been bleak. The rotation has been feast or famine. Trea Turner and Josh Harrison are the only hitters who have produced at a high clip all season, and the same being the case for Max Scherzer on the starting pitching front. Surely, Stephen Strasburg’s absence is doing the Nationals no favors. It also shouldn’t be stopping this bunch from playing .500 or better baseball.

Much like their divisional foes, there’s a plethora of talent in the Nationals’ clubhouse. But talent is merely talent when it doesn’t produce. It’s reasonable to be concerned about this team from multiple aspects.

The Braves have been an enigma. A team whose hallmark is its overwhelming offense has been struggling mightily in that regard. Freddie Freeman is hitting .218. Ozzie Albies is hitting .236. Marcell Ozuna is hitting .211. Dansby Swanson is hitting .207. It’s perplexing to no end.

On the hill, Ian Anderson and Huascar Ynoa have pitched at a high level, making up for the shortcomings of Max Fried, Charlie Morton and Drew Smyly. However, a couple new wrinkles have emerged. Mike Soroka suffered a setback in his rehab from a torn Achilles tendon and Ynoa is out for two months after breaking his hand. A rotation being held together by strings has been dealt two crushing blows.

The Braves have been consistently at the top of this division for four years and are experiencing their first bump in the road from a competitive standpoint. Their pillars are struggling at levels never before seen, and the long-standing weakness of their ballclub is growing more disconcerting. Is the 2021 season a wrap for the Braves? It is not, but it’s certainly time to be worried about how the season will fare for their sake.