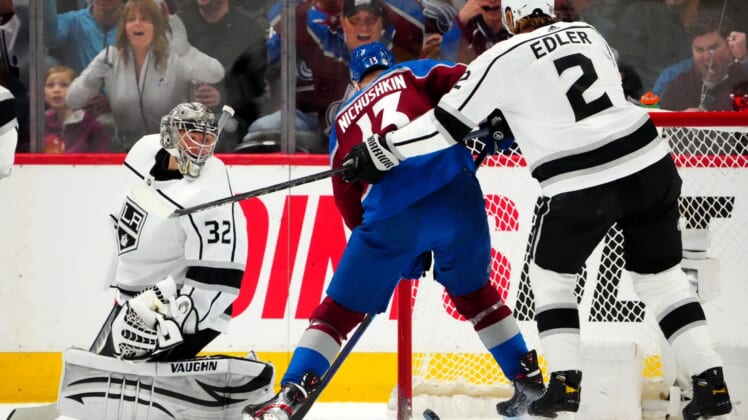 Nathan MacKinnon finished with three goals and two assists for the Colorado Avalanche, who set a franchise record for wins in a season by clobbering the Los Angeles Kings 9-3 on Wednesday in Denver, Colo.

Cale Makar had a goal and three assists, Valeri Nichushkin and Nicolas Aube-Kubel each scored twice, and Darcy Kuemper made 29 saves for the Avalanche (53-14-6, 112 points), the top-seeded team in the Western Conference.

Adrian Kempe, Alex Iafallo and Phillip Danault scored for Los Angeles, and Jonathan Quick gave up three goals on 10 shots before he was replaced by Cal Petersen midway through the first period.

Petersen finished with 19 saves for the Kings (39-27-10, 88 points), who remain three points ahead of the Vegas Golden Knights for third place in the Pacific Division, though the Golden Knights have two games in hand.

The Avalanche surged to a 4-0 lead after the first period against the Kings, who were coming off a 5-2 road win over the Chicago Blackhawks on Tuesday night.

Aube-Kubel scored his 10th goal of the season for a 1-0 lead 2:54, and Nichushkin scored his 20th goal just 39 seconds later for a 2-0 lead. Nichushkin is the seventh Avalanche player to reach 20 goals this season.

Aube-Kubel greeted Petersen with a goal 41 seconds later to make it 4-0.

Los Angeles made it interesting by scoring twice in the first 10:40 of the second period to make it 4-2.

The Avalanche re-established the four-goal lead by the end of the period, however.

Colorado went 5-for-5 on the power play in three games against the Kings this season.

The Avalanche continued to pour it on in the third, with MacKinnon scoring at 1:18, Nichushkin at 6:11 and MacKinnon completing his fourth NHL hat trick at 9:52 for the 9-2 lead.