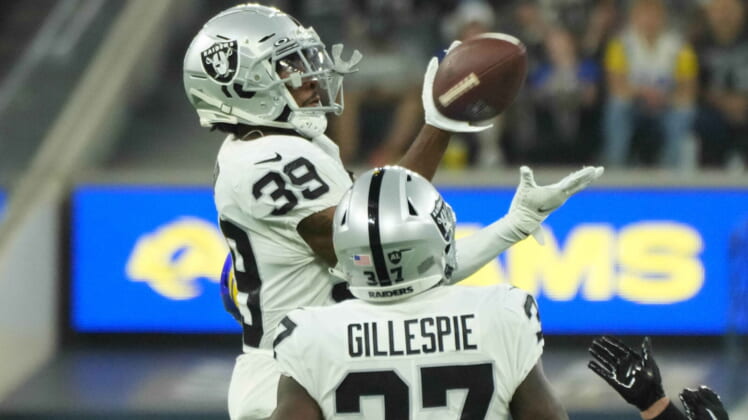 When the Las Vegas Raiders drafted cornerback Nate Hobbs in the fifth round of this year’s NFL Draft, they believed they had a versatile player who could compete right away at the slot corner position. After an impressive training camp, and now shining performances in two preseason games, Hobbs appears destined to make the team’s 53-man roster.

It was the Nate Hobbs show yet again on Saturday night at SoFi Stadium as the Raiders held off the Los Angeles Rams with a 17-16 win to move their record to 2-0 this preseason. Hobbs made play after play and continued to turn the heads of the Raiders coaching staff and fans alike.

“I’d like to say Nate Hobbs did a great job for us. We’ve got a fine, young defender there,” Raiders head coach Jon Gruden said to lead off his post-game press conference.”

Nate Hobbs not only played the slot corner position well – his coverage was A+ and he helped pressure the quarterback multiple times.

But Nate Hobbs made his biggest play in the third quarter he recorded an interception as he was one of three players to ascend on the ball in front of Rams wide receiver TuTu Atwell to intercept quarterback Bryce Perkins to help flip momentum in the Raiders direction, who were trailing 10-7. The Nate Hobbs interception led to an ensuing Raiders drive that ended in seven points and the lead.

“(It’s) crazy. Something I’ll never forget,” Hobbs told the media after the game. “I feel like I’m gaining the coaches’ trust. And they trusted me to play multiple spots. I feel like when guys go down, they can throw me at corner to fill in. It’s all about gaining their trust.”

During his four years as a Fighting Illini, Nate Hobbs recorded 168 total tackles, highlighted by a season-high 44 solo tackles through 13 games in 2019.

His transition to the NFL has not been without its struggles, but the confidence Hobbs continues to gain shows up on the field as he’s making plays and earning the trust of his coaches and teammates. His versatility also impressed Gruden who clearly likes Hobbs and what he offers defensive coordinator Gus Bradley’s defense.

“If you watch it carefully, he played nickel to start the game and did excellent there,” Gruden said. “Then we moved him outside. We have some corners hurt. Damon Arnette couldn’t go tonight, Keisean Nixon went out early, so he went outside and played very well and made some impact plays. I don’t usually give out game balls for preseason victories, but Nate Hobbs got one tonight. Well deserved.”

In addition, Hobbs was able to pressure the quarterback and provide speed amongst his fellow cornerbacks.

Hobbs, who added two solo tackles and a sack in last week’s win over the Seahawks, said receiving his first NFL game ball and an unusual preseason game ball from Gruden is a moment he will always remember.

Despite the injuries to Arnette and Nixon during the game, Nate Hobbs said he wants to show his improvements and variety of roles to Gruden, but also to defensive coordinator Gus Bradley and defensive backs coach Ron Milus.

Since being drafted in April, Gruden said he cannot wait to see what his NFL career will entail as time passes and his versatility increases.

“I would say I’m really proud of him, really excited to see what he does in his future,” Gruden said. “We tried to summarize him a couple of days ago. He has the ‘it’ factor. He rarely makes the same mistakes twice. He loves football, eats it up and he’s one of the energizers of our defense. He’s walked in here and given us a lot of skills that we can utilize.”

As an NFL athlete, Nate Hobbs said his mentality to not make the same blunder over and over is due to realizing that this is his job while adjusting to the league.

“I feel like trying to be a pro at what I do,” Hobbs said. “If I’m professional, I can’t keep making the same mistakes. At the end of the day, this is something they trusted me to do, and they pay me to do it. So I feel like I’m pro. I shouldn’t make the same mistakes.

“You are going to make mistakes. I’m a rookie and I’m a football player. Even football players, including rookies, make a mistake in the game, but don’t let it be the same one. So, I try to go about that way.”

With a couple of preseason wins, Gruden said it gives the team – especially the rookies and inexperienced players, such as Hobbs – the opportunity to gain confidence even if that means there is nothing on the line.

“Our young people have gotten better and found a way to win two football games, no matter what the stakes are,” Gruden said.

Hobbs and the Raiders complete its preseason schedule next Sunday at 1:00 p.m. against the San Francisco 49ers at Levi’s Stadium in Santa Clara, Calif.