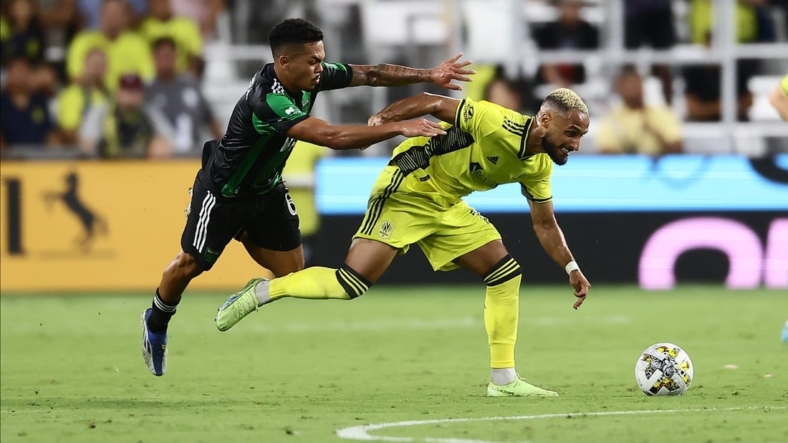 Walker Zimmerman opened the scoring for the home team with a thunderous header in the 48th minute.

Nashville (12-9-9, 45 points) solidified their playoff standing thanks to a dominant second half. Zimmerman scored on his team’s second corner of the half, and the hosts never let up. They controlled most of the final 45 minutes and were rewarded.

Then Mukhtar, in the thick of a Golden Boot and MVP race with Driussi, gave his team the insurance goal they were looking for. Both teams exchanged headers outside the visitor’s box, then Alex Muyl stole the ball and slipped Mukhtar into the box. Mukhtar had to run away from the center of the box but found a small window to beat goalkeeper Brad Stuver.

Then Nashville broke free in stoppage time, and Shaq Moore raced down the right flank before sending a cross into Mukhtar for a cool and calm finish. His 21st goal of the season moved him ahead of Driussi on the season.

Austin (15-8-6, 51 points,) holds on to second place in the Western Conference. However, the loss prevented it from officially securing a playoff berth. Driussi looked like he would have an MVP-caliber performance in the opening minutes, helping direct early chances, but he never found his way onto the scoresheet. He was denied by Joe Willis in the 85th minute on a good header.

Willis finished the night with a clean sheet thanks in part to five saves. Stuver made three in the defeat.

A nil-nil scoreline at the half did not reflect the opportunities both teams had to break through in the first 45 minutes.

One of the best chances came in the 40th minute when Austin’s Danny Hoesen tried to find Ethan Finley on the edge of the box, but his pass careened around and appeared to be headed in for an own goal, but Nashville’s Dan Lovitz cleared it off his line.

Hoesen then had another chance from the top of the box a minute later, but his shot rolled wide.

Moore, a US Men’s National Team-eligible fullback, made a potentially goal-saving tackle after Austin broke out in transition in the 43rd minute. Austin got out with four attackers to Nashville’s two, but Moore got across to break up the rush and deny a goal attempt.

Nashville tested Austin’s defense throughout the half, highlighted by a 27th-minute chance. Mukhtar found Alex Muyl in the center of the box, but Muyl’s shot went wide.