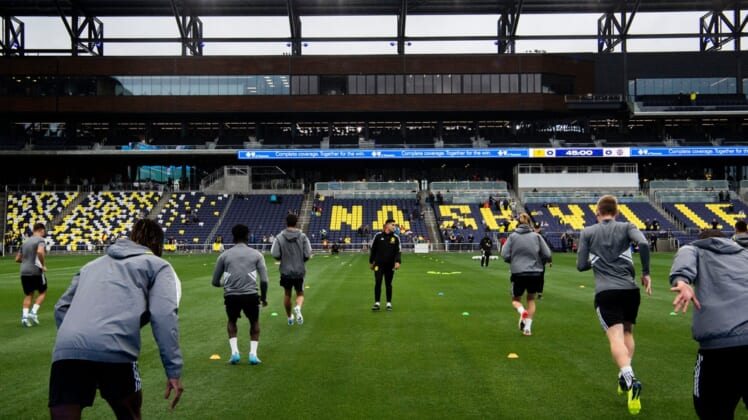 Nashville SC have weathered the storm after playing their first eight matches of the season on the road.

On Sunday, Nashville SC (3-3-2, 11 points) hope to christen Geodis Park in style when they host the Philadelphia Union (5-1-2, 17 points). The 30,000-seat venue is the largest soccer-specific stadium in the United States or Canada.

Although Nashville SC have been idle since dropping a 1-0 decision to the Los Angeles Galaxy last weekend, the club made news on Friday by signing two-time MLS Defender of the Year Walker Zimmerman and midfielder Hany Mukhtar to contract extensions through the 2025 season.

“We have really approached every aspect of this club with intentionality and extending Hany and Walker is just another example of that,” Nashville SC majority owner John Ingram said. “Both of these guys have the right mix of leadership and talent on the pitch as well as off. Making sure we can keep these pillars of the team intact through 2025 has been an important priority.”

Mukhtar certainly has given a thrill to the fans in Music City. He has recorded either a goal or an assist in each of his last 10 home matches (including playoffs) since being held in check in a 1-0 win over Philadelphia on July 3.

Mukhtar is tied with former Union forward C.J. Sapong with a team co-leading two goals this season for Nashville SC. Mukhtar’s four assists are tops on the team.

Philadelphia is trying to get back on track after dropping a 2-1 decision to Toronto FC on April 16 and settling for a 1-1 draw against CF Montreal the following weekend.

Julian Carranza scored in both contests to boost his season goal total to three, one shy of Daniel Gazdag for the team lead.

While the Union are welcoming the opportunity to play on a national stage on Sunday, coach Jim Curtin made it clear that his team wants to walk away with the win.

“We’re excited to play in it,” Curtin said of playing in Geodis Park. “We’re excited to be the ones that get the opportunity to open it, but at the same time we want to try to make 30,000 fans go quiet, which is the hardest thing to do in our game.”