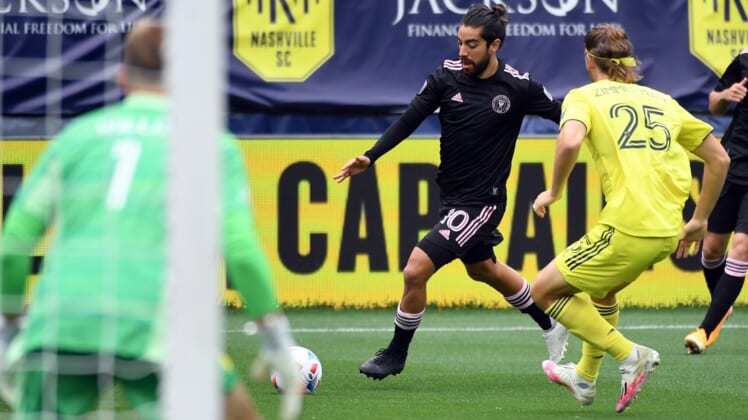 May 2, 2021; Nashville, TN, USA; Inter Miami midfielder Rodolfo Pizarro (10) plays the ball in the box as he is defended by Nashville SC defender Walker Zimmerman (25) during the first half at Nissan Stadium. Mandatory Credit: Christopher Hanewinckel-USA TODAY Sports

Nashville SC goalkeeper Joe Willis made two excellent stops inside the opening seven minutes to preserve a 0-0 draw, one that Inter Miami finished frustrated their opponents were allowed to finish with 11 players.

But Nashville’s Walker Zimmerman escaped a 69th minute challenge with only a yellow card when he might have received a red for denying Robbie Robinson an obvious goal-scoring opportunity.

Miami earned its first draw of the season without Argentine stars Gonzalo and Federico Higuain, who were away from the team earlier in the week because of the death of their mother. The brothers have combined for three of Miami’s first four goals.

Robinson, meanwhile, exited the match shortly after he entered as a substitute and helped spark the red card controversy. He appeared to aggravate a hamstring injury that had him listed as questionable on the team’s medical report entering the weekend.

Nashville settled for a third consecutive draw in three home matches to open the season, after previously coming from two goals down against Cincinnati and Montreal.

The hosts had arguably the better of the second half before Miami appeared to get one of its best chances of the game when Robinson got behind Zimmerman.

The center back clearly pulled the forward back, and referee Rosendo Mendoza originally appeared to reach for his back pocket for a red before instead producing a yellow from the breast pocket of his shirt.

A video review followed, but Mendoza upheld the initial decision, ruling that David Romney was also in position to defend Robinson. The resulting free kick was easily dealt with by Nashville’s defensive wall.

Before that, Miami’s best chances came early through Lewis Morgan and Jay Chapman. In the third minute, Morgan hammered Chapman’s low cross and forced Willis into an excellent save to his right. In the seventh it was the reverse, but with Willis making a similar stop.

Nashville’s best chance came after 35 minutes when Randall Leal’s through ball found Hany Mukhtar down the left. Mukhtar hammered his finish wide of the near post with Miami goalkeeper John McCarthy charging.