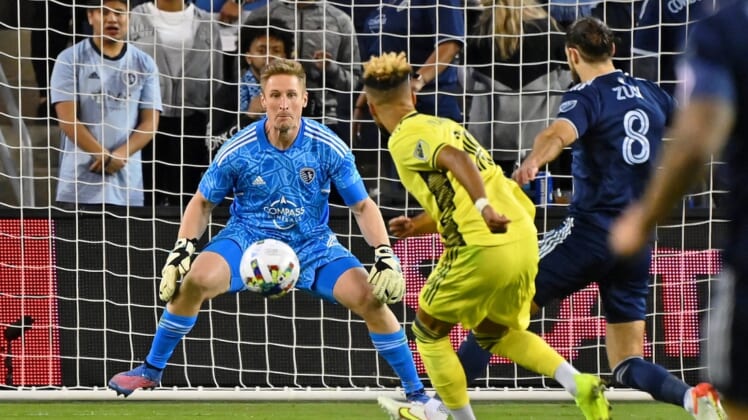 Sporting had won their previous two home games this season.

Nashville SC (3-2-1, 10 points) continued a stretch of eight straight road matches to start the season. Their three road wins are the most in the Western Conference. Nashville will open Geodis Park on May 1 against the Philadelphia Union.

Sporting KC (2-5-0, 6 points) continues to struggle on the offensive end, failing to score multiple goals in any match. SKC’s Graham Zusi nearly tied the game with a rocket from 25 yards out in the 81st minute, but it went wide right.

Trailing 1-0 at halftime, Nashville tied the score in the 51st minute. Following a set piece, Randall Leal found Dave Romney, whose header from very close range found the top left corner. It was the first goal conceded this season at home by Sporting.

Former SKC striker CJ Sapong put Nashville ahead with a goal in the 68th minute. Sapong picked up a loose ball in the middle of the box and fired it past SKC keeper Tim Melia.

Sporting nearly jumped on top in the fourth minute, but Johnny Russell’s shot from just outside the box was wide left. Sapong then almost put Nashville ahead, but Alex Muyl was caught offside.

Nashville had another chance in the 14th minute when SKC defender Nicolas Isimat-Mirin committed a foul on Hany Mukhtar in the box. Mukhtar lined up for the penalty kick, but Melia had no problem corralling it.

Remi Walter finally broke through for Sporting in the 25th minute. Daniel Salloi fed Ben Sweat with a pass deep down the left side. Sweat hesitated long enough to allow Walter to storm up the middle. After a perfect pass to the middle of the field, Walter one-timed it with his right foot past Nashville keeper Joe Willis.

It was Walter’s club-leading second goal of the season.