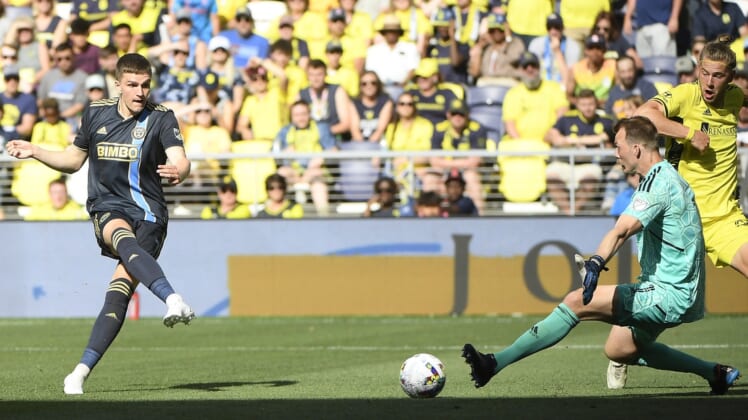 Randall Leal converted a penalty kick in the 85th minute to help host Nashville SC salvage a 1-1 draw against the Philadelphia Union on Sunday in the opening of Geodis Park.

The 30,000-seat venue is the largest soccer-specific stadium in the United States or Canada.

Mikael Uhre scored in the 66th minute and Andre Blake turned aside five shots for the Union (5-1-3, 18 points), who surrendered 13 corner kicks en route to seeing their winless stretch extend to three matches (0-1-2).

Nashville SC pressed for the equalizer in the late stages before Philadelphia’s Jose Martinez was whistled for a hand ball in the penalty area. Blake, who was shown a yellow card for refusing to stay on the line, guessed right on the penalty kick but was unable to deny Leal’s blast inside the left post.

The goal was Leal’s first of the season.

An apparent miscommunication by Nashville SC’s Sean Davis and Hany Mukhtar led to an opportunity on the counterattack for Philadelphia in the 66th minute. Uhre chased down a through ball from Daniel Gazdag and sidestepped Nashville SC defender Walker Zimmerman before cutting back and sending a shot in the net.

Nashville SC appeared to feed off the emotion of the crowd and nearly opened the scoring on a number of occasions.

Dax McCarthy’s blast from outside the box caromed off the left post in the fifth minute.

From there, Blake stood tall to keep the match scoreless. The two-time MLS Goalkeeper of the Year extended his leg to make a save on Alex Muyl from in close in the 23rd minute before making a two-handed stop on Mukhtar in the 30th.