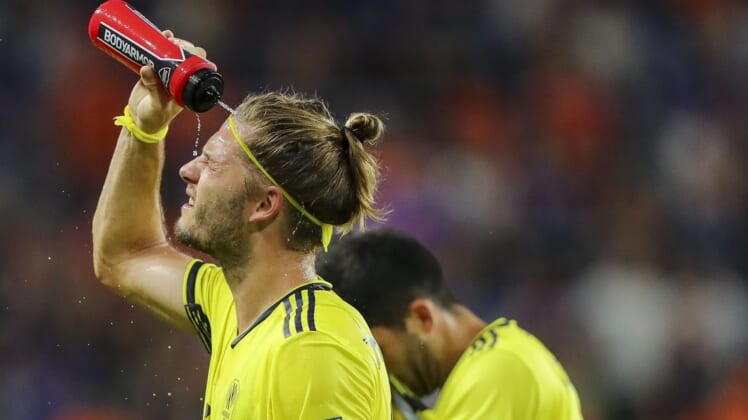 Meanwhile, the Vancouver Whitecaps haven’t suffered a road defeat in more than a month.

Hoping to have star Hany Mukhtar available while trying to get back on track at home, Nashville will aim to keep the Whitecaps from running their unbeaten MLS road streak to four games on Saturday night.

Nashville (8-7-7, 31 points) is amid a 1-2-2 stretch, in which it’s totaled just six goals. With Mukhtar and his team-leading 12 league goals out due to groin soreness, Teal Bunbury started in his return from injury to post a sixth-minute goal at rival FC Cincinnati last weekend. However, Cincinnati equalized early in the second half for a 1-1 draw.

That tie came on the heels of Nashville’s 2-1 home loss to Los Angeles FC on July 17. Nashville will play seven of its next nine matches at home, where it’s lost four times in 39 all-time games — but, twice over the last four (1-2-1).

“We come into a run of games that are going to be pretty pivotal, not only in the way we play, but also in some confidence we can build in our attacking play coming back home,” Nashville coach Gary Smith said.

It’s uncertain whether Mukhtar — six goals in his last five contests — will be available. However, Bunbury has six goals in eight matches versus Vancouver (7-10-5, 26 points), which is amid an 0-2-2 overall league stretch, but is riding a 1-0-2 road stretch and won the Canadian Championship over Toronto FC in a penalty kick shootout on Tuesday.

While that Voyageurs Cup win builds confidence, the Whitecaps need to rebound from a 3-1 MLS home loss to Chicago last weekend.

“If we play like (they did in the Canadian Championship) for the next 12 games in the league, we are going (to the playoffs), that’s pure and simple,” Vancouver coach Vanni Sartini said, per the MLS official website.

“It’s something that we have to build on.”

Vancouver’s Lucas Cavallini has recorded six of his team-leading seven goals in his last 10 league matches.