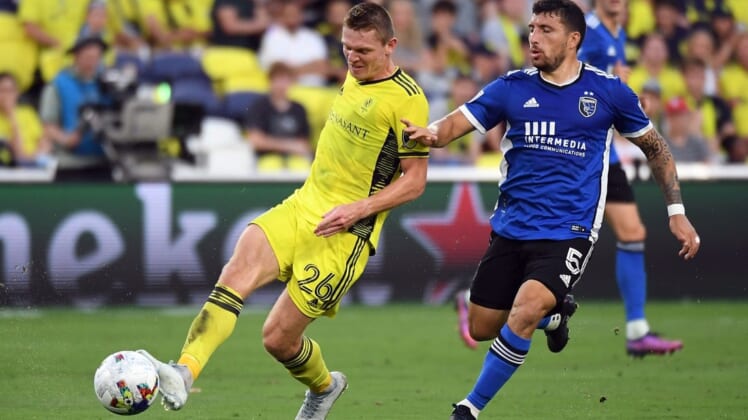 Nashville (6-4-5, 23 points) held 55.1 percent of the possession, recorded 14 total shots and nearly all of the prime scoring chances on the night to push that unbeaten league home run to 12-0-12. However, this marked the first time since a scoreless draw with Inter Miami CF on May 2, 2021, that Nashville was blanked on its own pitch.

Nashville, which has suffered just two defeats in 35 all-time MLS home matches, is 2-0-3 on its new home field, which opened last month. It’s 2-0-2 in its last four contests overall.

Facing the potency of Nashville stars Hany Mukhtar and C.J. Sapong (who have combined for 11 of Nashville’s 18 goals), the Earthquakes stepped up the defensive effort and showed some impressive discipline — for a club that’s allowed 32 goals on the season — to record their second clean sheet of 2022.

The Earthquakes conceded 13 goals in their previous four road contests.

Nashville appeared it would open the scoring in the ninth minute when Luke Haakenson broke free. He then put a move on San Jose keeper James Marcinkowski, only to be thwarted by sliding Earthquakes defender Paul Marie, who pushed the ball out of bounds.

In the 28th minute, it again looked as if Nashville had struck. After San Jose defender Nathan also made a sliding save on Mukhtar’s open strike, Sapong converted the deflection. However, the offside flag had already been raised. Five minutes later, Marcinkowski made a sprawling save on Mukhtar’s header.

Nashville held 61.2 percent of the possession in the first half, though only held a 4-2 edge in shots on target. San Jose matched Nashville’s six shots on target, but its best scoring chance didn’t come until the 87th minute via Jan Gregus.