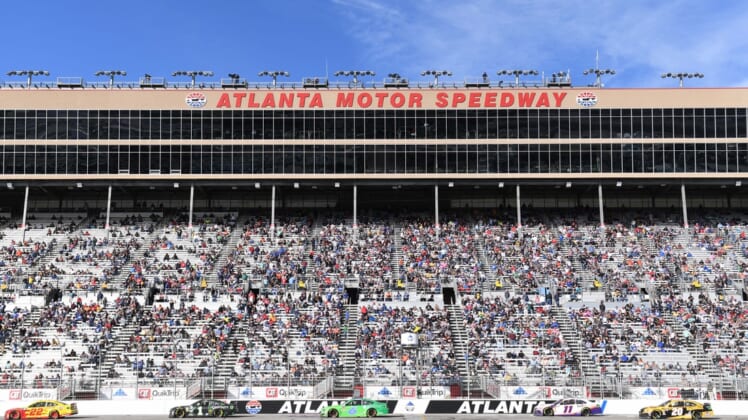 Feb 24, 2019; Hampton, GA, USA; A general view of the stands after the second stage during the Folds of Honor QuickTrip 500 at Atlanta Motor Speedway. Mandatory Credit: Adam Hagy-USA TODAY Sports

It’s unusual for the NASCAR Cup Series to run six races to start a season without seeing a repeat winner.

Not since 2014, when Kevin Harvick became the first multiple winner in the eighth event of the season, has the series produced six different winners in the first six races.

Last year, there were two duplicate winners in the first six races — Denny Hamlin and Harvick. That was the harbinger of a spectacular season for those two drivers, who combined to win 16 of the 36 points races.

Five different drivers have taken checkered flags to start the 2021 season, and that streak is likely to continue at Atlanta Motor Speedway in Sunday’s Folds of Honor QuikTrip 500 (3 p.m. ET on FOX, PRN and SiriusXM NASCAR Radio).

Harvick and Brad Keselowski have dominated Atlanta in the recent past, each winning two of the last four events. Neither driver has won a race so far this season. Neither has Keselowski’s Team Penske teammate, Joey Logano, who won two of the first four races in 2020.

And though two of his Hendrick Motorsports teammates — William Byron and Kyle Larson — already have tasted victory this year, reigning champion Chase Elliott has not. Current Cup Series leader Hamlin, a seven-time winner in 2020, likewise has yet to visit Victory Lane.

In fact, the top three drivers in the point standings — Hamlin, Keselowski and Logano — all have achieved their current ranks without winning.

Atlanta Motor Speedway hasn’t been repaved since 1997, and the old, abrasive asphalt at the 1.54-mile track favors veteran drivers who can manage their equipment and preserve tire life over the course of a fuel run.

“Atlanta is definitely a tough place,” says Elliott, who finished eighth in last year’s Folds of Honor QuikTrip 500. “The race track has a lot of wear to it — the surface is one of the oldest that we go to — so finding grip is a challenge. The track has a lot of character and is very line-sensitive to where you can and can’t run to find that.

“You really have to hit your marks in Atlanta to have success. I think the track conditions this weekend will be pretty similar to last year in a lot of ways. The No. 9 team and I have talked a lot about last year’s event. That’s how we’re going about the setup for Sunday is from last year and taking things away from how we did — what we did good and what we can improve on.”

If form holds, Elliott will have to improve to beat Harvick, who led 151 of the 325 laps last year, including the final 55 circuits during a 108-lap green-flag run to the finish.

Given Harvick’s strength at Atlanta — not to mention the sizable group of as-yet-winless powerhouse drivers who will start Sunday’s race — it’s likely the streak of different winners will reach six this weekend.

In the NASCAR Xfinity Series at Atlanta Motor Speedway, AJ Allmendinger is undefeated.

OK, Allmendinger has started only one race in the series at the 1.54-mile track, but the result last year was a milestone win for the driver of the No. 16 Kaulig Racing Chevrolet — his first in any of NASCAR’s top three series on an oval.

Allmendinger was a part-timer last season. This year he’s full-time with Kaulig Racing, and he already has announced his championship intentions with an oval victory at Las Vegas Motor Speedway in the fourth race of the season.

Once considered a one-trick pony on road courses, Allmendinger relishes a return to Atlanta this weekend for Saturday’s EchoPark 250 (5 p.m. ET on FS1, PRN and SiriusXM NASCAR Radio).

“I have always loved Atlanta,” says Allmendinger, who is fourth in the Xfinity Series standings behind Kaulig Racing teammate Jeb Burton. “It’s such a fun race track to drive because of the worn-out pavement and how much the cars slide around.

“Atlanta will always be special to me after winning my first oval race there. I can’t wait to get back to it this weekend.”

Kaulig Racing boasts an enviable record entering Saturday’s race. For 38 straight races from the start of the 2020 season, at least one Kaulig driver has finished in the top 10. The organization also has placed at least one of its cars in the top five in all five events this season.

In addition, Allmendinger is the only former Atlanta winner in the field this week.

To triumph in the second leg of a Saturday doubleheader at Atlanta, however, the Xfinity regulars will have to beat NASCAR Cup Series interloper Martin Truex Jr., fresh from his victory in last Sunday’s Cup event at Phoenix Raceway.

Plus this weekend, the Atlanta Motor Speedway Xfinity race will serve as the qualifier for the first round of the 2021 NASCAR Xfinity Series Dash 4 Cash program. The highest finishing four NASCAR Xfinity Series full-time competitors at Atlanta will qualify for the first round of the Dash 4 Cash at Martinsville Speedway on April 9.

ATLANTA COULD BRING ROUND 2 OF KYLE BUSCH MOTORSPORTS BATTLE

Even though Nemechek has a victory and Playoff spot in the bank, the mission hasn’t changed for the driver of the No. 4 Kyle Busch Motorsports Toyota as he heads for Atlanta Motor Speedway and Saturday’s Fr8Auctions 200 (2:30 p.m. ET on FS1, MRN and SiriusXM NASCAR Radio).

“I don’t think we’re going to change our plan of attack whatsoever,” says Nemechek, who will start from the pole in the first leg of a Saturday doubleheader with the NASCAR Xfinity Series. “We’re here to win races. #Here4Wins is the hashtag we’ve been using since the announcement of myself coming to Kyle Busch Motorsports.

“(Crew chief) Eric (Phillips) and I are on the same page. Kyle, Toyota and all of our partners want to win, and that’s why we’re here. We are going to go try and win everything we can from poles to stages to practice to races. Anything and everything that we can win, we want to.”

Busch’s presence sets up another potential showdown between the team owner and his marquee driver. And Busch would hate to lose two in a row.

“At Las Vegas, John Hunter was a little bit better than us at the end of the race, and I hate I finished second, obviously, but it’s nice to see our Tundras getting used to their full potential and running up front,” Busch says.

“I’m excited to have John Hunter racing at KBM this year and to have Eric Phillips back on board. I felt like, when we were able to make that move over the offseason and pair those two together, it was going to be a winning combination. Three races in, we’ve already reaped the benefits.”

NASCAR Cup Series
Next Race: Folds of Honor QuikTrip 500
The Place: Atlanta Motor Speedway
The Date: Sunday, March 21
The Time: 3 p.m. ET
TV: FOX, 2:30 p.m. ET
Radio: PRN, SiriusXM NASCAR Radio
Distance: 500.5 miles (325 laps); Stage 1 (Ends on Lap 105), Stage 2 (Ends on Lap 210), Final Stage (Ends on Lap 325)
What To Watch For: Atlanta Motor Speedway has hosted 113 NASCAR Cup Series races dating back to the inaugural race on June 31, 1960. The first Cup race at Atlanta was won by Fireball Roberts. … The 113 NASCAR Cup Series races at Atlanta have produced 53 different pole winners and 44 different race winners. … NASCAR Hall of Famer Richard Petty leads the series in starts at Atlanta with 65 starts. Kevin Harvick leads all active drivers with 30 starts. … Buddy Baker and Ryan Newman are tied for the series-most poles at Atlanta with seven each. … Dale Earnhardt leads the series in wins at Atlanta with nine. Kevin Harvick and Kurt Busch lead all active drivers with three each. … The youngest Cup winner at Atlanta is Kyle Busch (03/09/2008 — 22 years, 10 months, 7 days) and the oldest is Morgan Shepherd (03/20/1993 — 51 years, 5 months, 8 days). 14 of the 113 Cup races at Atlanta have been won from the pole or first starting position; the most recent to do it was Kasey Kahne in 2006.

NASCAR Xfinity Series
Next Race: EchoPark 250
The Place: Atlanta Motor Speedway
The Date: Saturday, March 20
The Time: 5 p.m. ET
TV: FS1, 4:30 p.m. ET
Radio: PRN, SiriusXM NASCAR Radio
Distance: 251.02 miles (163 Laps); Stage 1 (Ends on Lap 40), Stage 2 (Ends on Lap 80), Final Stage (Ends on Lap 163)
What To Watch For: Atlanta Motor Speedway has hosted 29 NASCAR Xfinity Series races dating back to the first event on March 14, 1992. The first Xfinity Series race at Atlanta was won by Jeff Gordon driving the Bill Davis Racing No. 1 car. … The 29 Xfinity Atlanta races have produced 17 different pole winners and 18 different race winners. … Jeff Green, Kevin Harvick and Jason Keller lead the series in Atlanta starts with 17 each. … Kyle Busch leads the series in poles at Atlanta with six. … Kevin Harvick leads the series in wins at Atlanta with five. AJ Allmendinger is the only former Xfinity Atlanta winner (2020) entered this weekend. … The youngest Xfinity winner at Atlanta is Jeff Gordon (03/14/1992 — 20 years, 7 months, 10 days) and the oldest is Harry Gant (03/12/1994 — 54 years, 2 months, 2 days). … Six of the 29 Xfinity Atlanta races have been won from the pole or first starting position; the most recent was Kyle Busch in 2017.