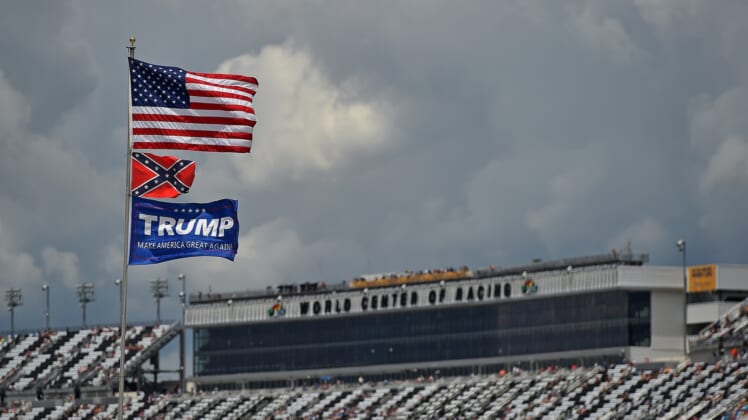 Jul 1, 2017; Daytona Beach, FL, USA; A general view of an american flag flying above a confederate and President Trump flag in front of the main grandstands during the Fircracker 250 at Daytona International Speedway. Mandatory Credit: Jasen Vinlove-USA TODAY Sports

On Wednesday, NASCAR made a huge announcement regarding the Confederate flag. Then, Ray Ciccarelli made an announcement of his own.

Ciccarelli is a 50-year-old racer. He currently participates in the NASCAR Gander RV & Outdoors Truck Series, driving the No. 49 Chevrolet Silverado for CMI Motorsports.

Not much longer, it would appear.

On Wednesday he shared a message on his Facebook page indicating he will quit after the 2020 season:

“Well its been a fun ride and dream come true but if this is the direction Nascar is headed we will not participate after 2020 season is over , i don’t believe in kneeling during Anthem nor taken ppl right to fly what ever flag they love. I could care less about the Confederate Flag but there are ppl that do and it doesn’t make them a racist all you are doing is f****** one group to cater to another and i ain’t spend the money we are to participate in any political BS!! So everything is for SALE!! Sarah Ciccarelli”

Out of 18 career races on the NASCAR Gander RV & Outdoors Truck Series, Ciccarelli has placed in the top 10 just once.

To quote Ciccarelli, “The direction NASCAR is headed” is a big deal this fine Wednesday. The professional racing league announced that it is from this moment forward banning the Confederate flag.

If you’ve ever been out to a race or seen one on television, you know this is a big deal.

In light of the Black Lives Matter movement and spearheaded by Bubba Wallace, NASCAR is taking a significant turn toward humanity with this stance.

Though, it’s hardly surprising that not everybody sees it this way.