NASCAR team faces big closure ahead of the 2023 season

NASCAR has seen many teams face the unfortunate situation of being close to shutting down their operations. Which team is facing the same fate ahead of 2023? 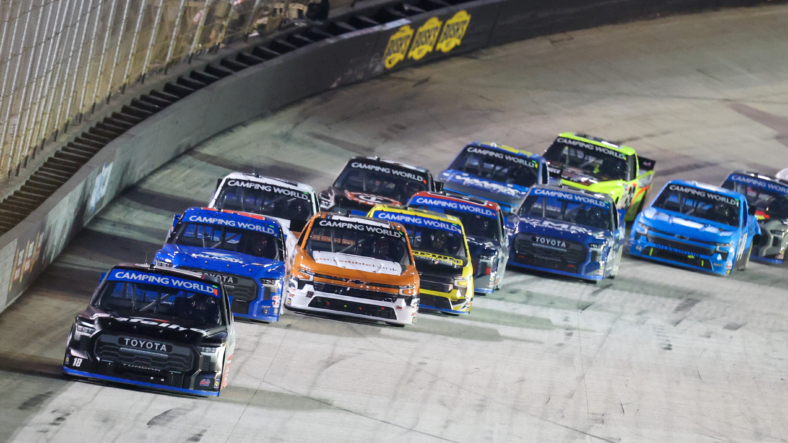 On Point Motorsports, a team in the NASCAR Truck Series, could be forced to shut its doors if the needed funding is not acquired for the 2023 season, according to Catchfence’s Chris Knight.

Let’s dive into the organization’s history and what is next for them.

On Point Motorsports’ past history and statistics in NASCAR

On Point Motorsports was formed in 2018 when former JGL Racing crew chief Steven Lane and a group of investors formed the No. 30 team. The organization’s first race was on August 16 with Scott Lagasse Jr. in a 31st-place finish.

Jeb Burton and Austin Theriault also made starts during the season with the best finish coming in eighth-place by Theriault at Las Vegas Motor Speedway due to avoiding many wrecks.

The 2019 season was On Point Motorsports’ most successful when Brennan Poole piloted the No. 30 truck for 13 events. Poole managed to bring the organization its only top-5 finish at Charlotte Motor Speedway in second place behind Kyle Busch.

Including the race at Charlotte, Poole went on a six-race stretch with a worst finish of 19th place and three top-10 finishes. It is by far On Point Motorsports’ most successful run in the Truck Series.

In 2020, Poole and Danny Bohn split the season while Lagasse managed to finish in eighth place during his only start of the season. The best finish of the season was by Poole with a seventh-place effort at Martinsville Speedway.

Bohn took over the vehicle on a full-time basis during the 2021 season outside of two events. Bohn ran solid but not as well as Poole with the best finish coming in eighth place at Talladega Superspeedway.

It was announced that Tate Fogleman would run full-time in the No. 30 truck for the 2022 NASCAR season; however, the partnership only lasted 11 events with no top-10 finishes, but a better average finishing position than Bohn last year.

Ever since it ended, the team has been running with numerous drives including Kaden Honeycutt, Josh Bilicki, Joey Gase, Camden Murphy, and Chris Hacker. The results have not been great outside of Honeycutt’s 13th place finish at Bristol Motor Speedway.

Related: NASCAR team trying for big return at Talladega in 2022

On Point Motorsports’ future in the NASCAR Truck Series

On Point Motorsports is not in a great spot financially and this is something that has plagued them for years. Sponsorship woes have been present since their first full-time season in 2019.

Lane talked to Catchfence about the organization’s situation for the 2023 season and beyond in further detail.

“If things don’t change or we aren’t able to find some footing for 2023, I will have no choice but to cease operations and look at doing something different.”

Steven Lane to Catchfence on On Point Motorsports’ situation

The issue of finding sponsorship is not an uncommon one in NASCAR. It is different than other sports, like the NBA, where a team can simply sign a player to a contract because they want them to join.

A driver needs to have funding linked to them or the organization needs to find sponsorship itself to help make the car or truck go around the track. This is the major difference between other sports and motorsports.

“We’re hoping to reset and find a driver or partners that will allow us to contend and compete in 2023…I think we have shown that we can do that with the right circumstances and driver.”

Steven Lane to Catchfence on the organization’s past NASCAR success

Honeycutt would be a brilliant option if he can secure more funding for the 2023 season. The 19-year-old driver has run well in his select starts with the No. 30 team and could represent a building point for the future.

The right opportunity needs to present itself if the organization doesn’t want to cease operations. The past history of the No. 30 truck suggests that a driver could potentially win at a superspeedway or improve enough to elevate the team like Poole.

It is going to take some work to make sure the organization can continue its tenure in NASCAR or if it will see the doors close before the first Truck Series race at Daytona International Speedway next year.