Naomi Osaka, Victoria Azarenka advance through Round 1 at Roland Garros 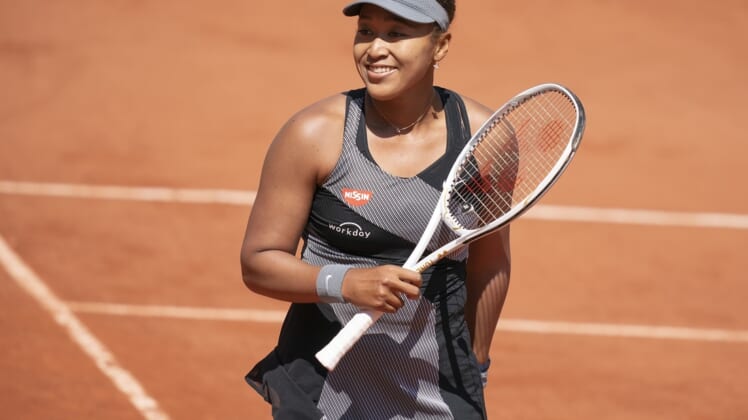 No. 2 seed Naomi Osaka of Japan held off a solid effort from Romania’s Patricia Maria Tig to win her first-round match 6-4, 7-6 (4) on Sunday at the French Open in Paris.

Osaka, the reigning U.S. Open and Australian Open champion, took one hour and 47 minutes to oust the World No. 63, winning 89 percent of first-service points and notching 39 winners to improve to 2-0 against Tig.

The four-time Grand Slam champion, trying to reach second-week action for the first time on the clay courts of Roland Garros, spoke briefly in an on-court interview following the match.

“I would say it’s a work in progress; hopefully the more I play, the better I get,” said Osaka, who was fined $15,000 Sunday for skipping her post-match press conference and faces a potential expulsion from the French Open if she continues to boycott the sessions.

“If she wins, she’ll get used to it. She can play as good on clay as she plays on hard courts,” said Tig regarding Osaka’s performance on clay.

Osaka has recorded 15 straight match wins in Grand Slam events, but she’s playing in Paris for the first time since 2019 after withdrawing last year with a hamstring injury prior to the tournament.

It took former world No. 1 Azarenka exactly two hours to seal the win. Each player broke serve seven times, and Kuznetsova hit more winners than Azarenka by a 26 to 19 margin, however she also had 41 unforced errors, seven more than Azarenka.

“Playing against [Kuznetsova] is always a battle,” Azarenka said in her on-court interview. “Every time we play, it’s gonna be very physical, it’s gonna be really mentally tough because we fight for every point.”

Azarenka is now 7-4 against the Russian and will next face Denmark’s Clara Tauson in the second round. Tauson beat Georgia’s Ekaterine Gorgodze 6-4, 6-2.

Former world No. 1 and No. 26 seed Angelique Kerber of Germany was upset in her opening-round match vs. qualifier Anhelina Kalinina of Ukraine. Kalinina won 6-2, 6-4 and took 1 hour and 28 minutes to end Kerber’s quest to complete her career Grand Slam this season.

Seeded players to advance to the second round on Sunday included No. 3 seed Aryna Sabalenka of Belarus, No. 11 Petra Kvitova of Czech Republic, No. 21 seed Elena Rybakina of Kazakhstan, No. 29 seed Veronika Kudermetova of Russia and No. 31 seed Anastasia Pavlyuchenkova of Russia.