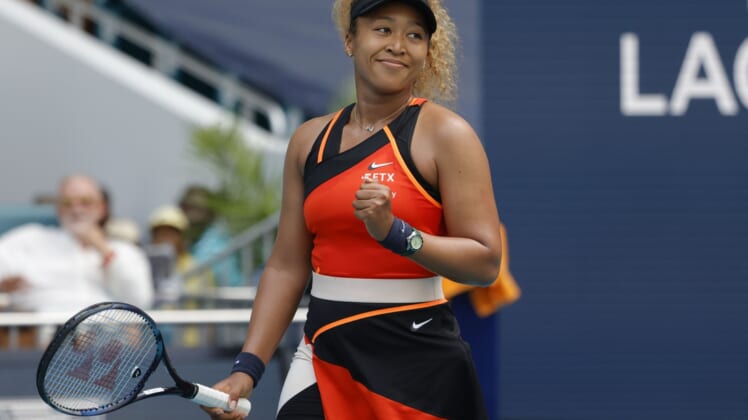 Japan’s Naomi Osaka was in top form on Thursday and converted 88.9 percent of her first-serve points while rolling to a 6-2, 6-3 victory over 13th-seeded Angelique Kerber of Germany in the second round of the Miami Open on Thursday.

Osaka served six aces without a double fault while finishing off Kerber in 60 minutes.

“She’s like the first high-seeded player I’ve beaten this year,” Osaka said on-court after the win. “I feel like I came into the match wanting to dictate. My power on the shots was working really well.”

Osaka will next face Karolina Muchova of the Czech Republic, who registered a 6-4, 7-6 (3) victory over 18th-seeded Leylah Fernandez of Canada on Thursday.

The upset win came during Muchova’s first tournament since last summer’s U.S. Open. She has been out with an abdominal injury.

Muchova said after the match that she was physically spent.

“(After an injury) you can do whatever fitness, but the match is something else,” Muchova said. “For me it was a win just to play and compete again.”

Last year’s U.S. Open champion, 11th-seeded Emma Raducanu, was also upset in the second round. Katerina Siniakova of the Czech Republic sent the Brit packing with a 3-6, 6-4, 7-5 win.

Meanwhile, ninth-seeded Floridian Danielle Collins returned from an illness to post a 6-3, 3-6, 6-4 win over Hungary’s Anna Bondar. It was Collins’ first victory since reaching the final of the Australian Open.

Collins was sidelined the last five-plus weeks due to what she termed a viral illness. She retired during a match in Dubai on Feb. 15 due to dizziness and withdrew from Indian Wells earlier this month.