Naomi Osaka, whose focus on mental health prompted her to take a hiatus from tennis earlier this summer, fought back tears and took a short break during a video press conference Monday.

The world’s second-ranked player was speaking to the media ahead of the Western & Southern Open in Mason, Ohio.

Osaka, who was born in Japan to a Japanese mother and a Haitian father, stated that she would donate her winnings from the Ohio event to relief efforts related to the recent earthquake that devastated Haiti.

She got choked up and wound up stepping away from the call for a few minutes.

Earlier in the call, Osaka was asked by a reporter about her dealings with the media. Osaka previously stated that her difficulties with navigating press conferences contributed to the mental state that led her to withdraw from the French Open and skip Wimbledon this year.

A Cincinnati Enquirer reporter said, “You’re not crazy about dealing with (the reporters) … yet you have a lot of outside interests that are served by having a media platform. … How do you balance the two?”

Osaka asked for a clarification on the question. The reporter rephrased the question, and Osaka replied, while taking several long pauses, “Hmm, that’s interesting. … I would say the occasion, like, when to do the press conferences is what I feel is the most difficult, but … hmmm …… sorry, I’m thinking …” 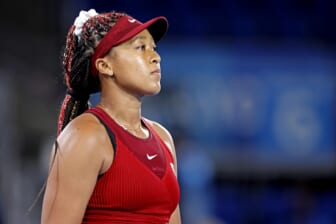 The press conference moderator asked if Osaka wanted to move on, but she again asked the reporter to elaborate.

She answered, “For me, I feel like, this is something that — I can’t really speak for everybody, I can only speak for myself — but ever since I was younger, I’ve had a lot of media interest on me, and I think it’s because of my background as well, as you know, how I play, because in the first place I am a tennis player, that’s why a lot of people are interested in me.

“And I know that it’s because I’ve won a couple of Grand Slams and I’ve gotten to do a lot of press conferences that these things happen. But I would also say, I’m not really sure how to balance the two, I am figuring out at the same time as you are, I would say.”

Osaka’s agent, Stuart Duguid, later objected to the line of questioning. He wrote to a New York Times freelance report, “The bully at the Cincinnati Enquirer is the epitome of why player/media relations are so fraught right now. Everyone on that Zoom will agree that his tone was all wrong and his sole purpose was to intimidate. Really appalling behavior.

“And this insinuation that Naomi owes her off court success to the media is a myth — don’t be so self-indulgent.”