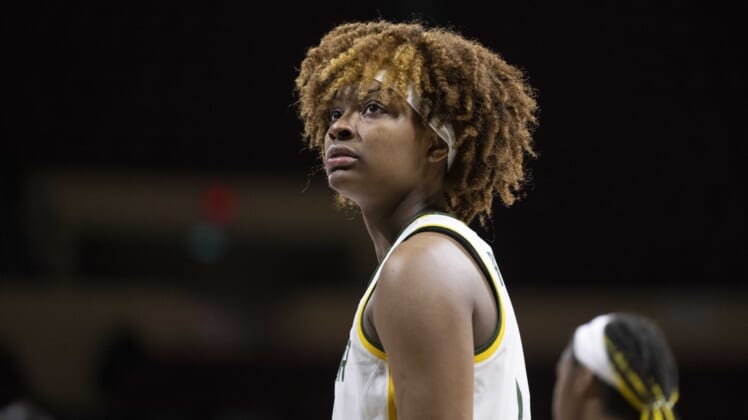 The WNBA released its initial list of draft entrants Tuesday, which includes 88 collegiate players who have formally declared.

Baylor’s NaLyssa Smith is passing on the extra year of COVID-19 eligibility and entering the draft. A 6-foot-4 forward and three-time All-American, Smith is expected by many to be a top five pick.

So is fellow All-American Rhyne Howard, who is leaving Kentucky after four seasons,. She averaged 20.5 points, 7.4 rebounds and 3.3 assists per game this past season.

Florida Gulf Coast star Kierstan Bell, 22, is leaving two years of eligibility on the table by entering the draft early. Bell has been in the top 10 in the nation in scoring in each of the past two seasons and led the Eagles to an upset win over No. 5 Virginia Tech in this year’s NCAA Tournament.

Louisville’s Emily Engstler and Kianna Smith have also declared, though players that are in the Final Four have an extended window to decide on the draft. They must declare no later than 48 hours after their team’s final game.

Notably absent from the list is NC State’s Elissa Cunane. She has one year of eligibility remaining, but the 6-5 All-American has indicated for most of the season that this would be her last in college. Since the Wolfpack last played on Monday night — a double overtime loss to No. 2 UConn in the Elite Eight — Cunane has until Wednesday evening to declare.