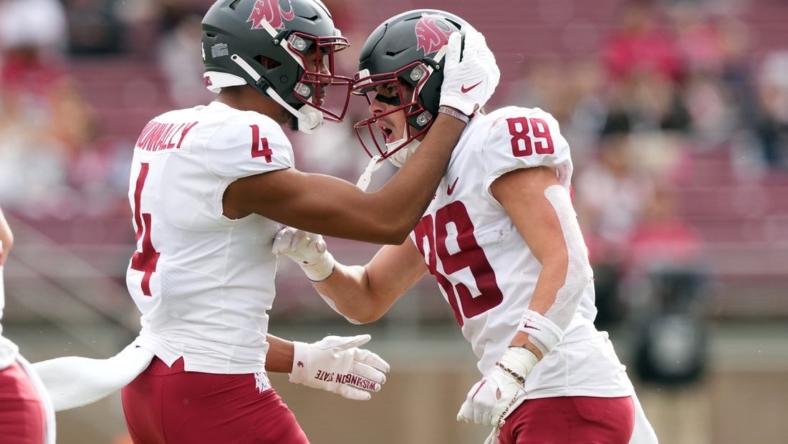 Washington State scored following three fumbles in the first half and Nakia Watson rushed for 166 yards and a touchdown on 16 carries in the Cougars’ 52-14 win Saturday over host Stanford in Pac-12 play.

Washington State, which ran for a season-high 306 yards, scored touchdowns on their first three possessions to build a 21-7 lead before taking advantage of Stanford’s fumbling problems.

Jaden Hicks recovered a fumble by Stanford running back Ashton Daniels and returned it 17 yards for a touchdown to increase the lead to 28-7 with 8:06 left in the second quarter.

Stanford’s Elijah Higgins fumbled on a 22-yard pass play from Tanner McKee in the Cardinal’s next possession. Chau Smith-Wade recovered it at the Washington State 38-yard line.

The Cougars drove for a touchdown in 11 plays, culminating on Cameron Ward’s 9-yard pass to Donovan Ollie on a fourth-and-3 play with 2:09 left in the second quarter.

Daiyan Henley recovered the ball for Washington State, which took over at the Stanford 41 after Henley’s 11-yard return.

Watson followed with a touchdown run on the next play, increasing Washington State’s lead to 42-7 with 59 seconds left in the half.

Stanford opened the second half with a 74-yard, seven-play drive ending with Ashton Daniels’ 2-yard run.

The Cardinal could not build momentum after that possession, following with two consecutive three-and-out possessions and a turnover on downs.

With the game in hand, Ward was replaced at the start of the fourth quarter by backup John Mateer.

Ward completed 16 of 32 pass attempts for 176 yards with two touchdowns and no interceptions.

Mateer engineered a touchdown drive on his first series, finishing with a 27-yard pass to Orion Peters with 11:17 left.

McKee passed for 236 yards while completing 23 of 40 attempts with no touchdowns or interceptions.