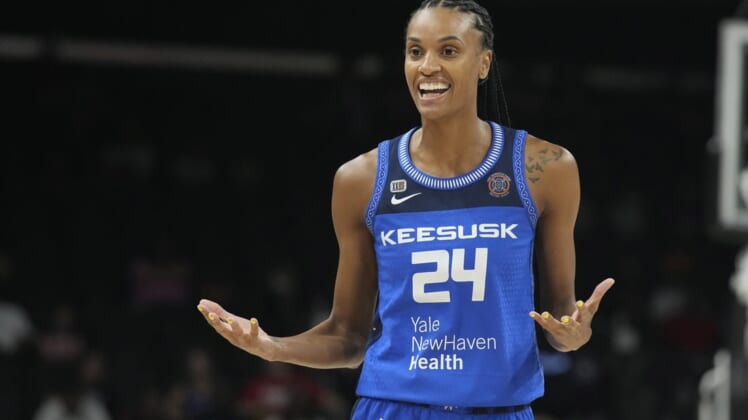 Connecticut (12-4) is coming off Friday night’s 82-71 home victory against the Seattle Storm. DeWanna Bonner led the Sun with 20 points and 10 rebounds for her first double-double of the season.

“I’m just riding this wave of everybody else,” Bonner said of a team that has won two straight and six of seven. “I’ve got some great teammates.”

“Just talk about her versatility,” coach Curt Miller said of Thomas, a power forward who has also served as backup point guard. “Her versatility is truly special. She’s our engine as we always remind people.”

The Mystics (10-7), meanwhile, have dropped two of their last three, including Thursday’s 77-65 road loss against the New York Liberty.

“We have to get our mind set for Connecticut,” Mystics guard Kennedy Burke said. “They’re a tough team, too.”

Only four WNBA teams entered the weekend with double-digit win totals and these are two of them.

The Mystics will likely have forward Elena Delle Donne in action based on the latest update. She sat out Thursday night as a rest night, part of a plan to monitor her workload.

Mystics coach Mike Thibault sounded most disappointed in his offense after the team produced a season-low point total against the Liberty.

Connecticut pinned a 79-71 loss on the visiting Mystics on May 28. Delle Donne didn’t play in that game and the Mystics were outrebounded 41-19.

The Sun are still trying to work in guard Jazmine Jones, who was signed less than a week ago. She played 11 minutes in a victory against Atlanta on Wednesday but didn’t get into the Seattle game.

The Mystics are celebrating the 25th anniversary of the team’s first home game as part of Sunday’s contest. Past standouts Vicky Bullett, Chamique Holdsclaw and Murriel Page will be inducted into the franchise’s first Hall of Fame class.