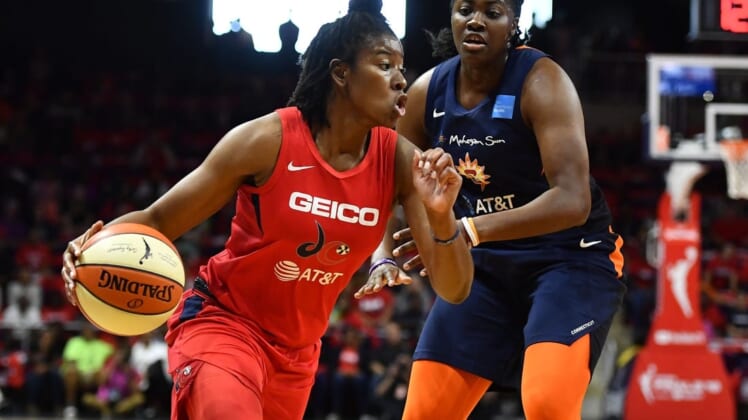 Elena Delle Donne is the big name on the Washington Mystics, but they wouldn’t have the second-best record in the WNBA this season without Ariel Atkins.

And the Mystics will be counting on Atkins on Saturday night when they visit the Connecticut Sun in the showdown between the top two teams in the WNBA’s Eastern Conference. Delle Donne, who is averaging a team-best 17.7 points per game, eclipsed the 4,000-point career mark earlier this week, but she’ll be sitting out Saturday for what coach Mike Thibault said is a scheduled day off.

Atkins is second on the team with 15.4 points per game, and she also adds 3.5 rebounds and 2.6 assists per game. In her fifth season, she’s shooting 46.7 percent from the field and 46.2 percent from 3-point range, both career highs.

An All-Star last season and a member of the 2020 U.S. Olympic team that won a gold medal, the 25-year-old Atkins hasn’t achieved Delle Donne’s status as a household name yet.

“She may not get the national publicity, but I know she’s a part of everybody’s scouting report. I’d rather have that,” said Dawn Staley, who coached the Olympic team, in an interview with The Washington Post.

“I think the bottom line is she’s not one that wants all of that spotlight, but it doesn’t mean that she doesn’t deserve it because she does.”

The Mystics (6-2) have won three of their past four games. The Sun (5-2) are second behind the Mystics in the Eastern Conference and are fresh off Thursday night’s 99-68 throttling of visiting Dallas.

Against the Wings, the Sun were driven by defense. They scored 27 points off 19 Dallas turnovers on Thursday — two days after losing to the Wings when Dallas turned the ball over just 10 times.

“All the difference in the world,” Sun head coach Curt Miller said of the increased turnovers in the second game of the back to back. “… We couldn’t turn them over on Tuesday, we just seemed reactive. I thought we were more proactive tonight. We played with a little bit more aggression, a little bit more fire in us.”