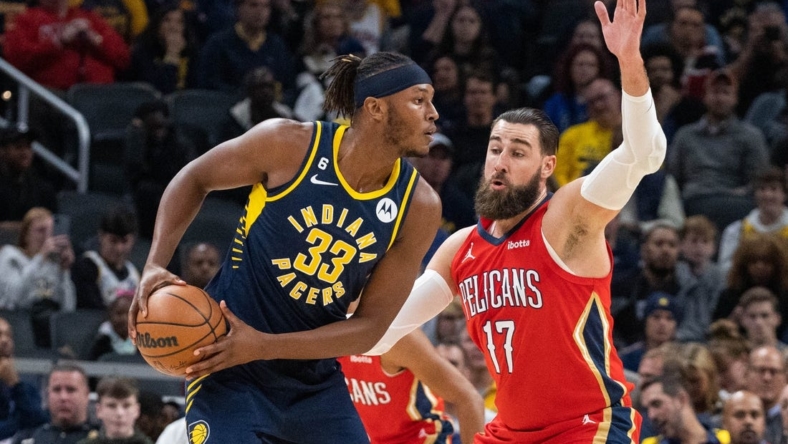 Myles Turner had 37 points to lead six Indiana scorers in double figures and added 12 rebounds as the host Pacers defeated the New Orleans Pelicans 129-122 on Monday night in Indianapolis.

The Pelicans trailed by three at halftime and twice got within one early in the third quarter but couldn’t pull even.

Haliburton made three 3-pointers and Turner and Hield made one each as the Pacers opened an 85-72 lead.

Ingram answered with a basket and added another that got New Orleans within seven.

Haliburton, Mathurin and Turner each made a 3-pointer as Indiana increased the lead to 100-91 at the end of the third quarter.

McConnell started the fourth-quarter scoring with consecutive baskets that increased the lead to 13.

New Orleans twice got within seven points, the second time on a 3-pointer by Ingram with 1:12 remaining, but Nembhard answered with a 3-pointer.

The Pacers scored the first nine points of the game before Williamson’s basket ended the Pelicans’ scoring drought nearly four minutes in.

Indiana took a 10-point lead before New Orleans started making 3-pointers. Ingram made two, CJ McCollum, Murphy and Graham made one each and Williamson added his first of the season as the Pelicans got within 32-30 at the end of the first quarter.

New Orleans tied the score at 36 on a 3-pointer by McCollum and took its first lead at 44-42 on a dunk by Williamson.

Graham’s 3-pointer gave the Pelicans their biggest lead of the half, 51-47, before the Pacers took a seven-point lead that shrunk to 58-55 at halftime.