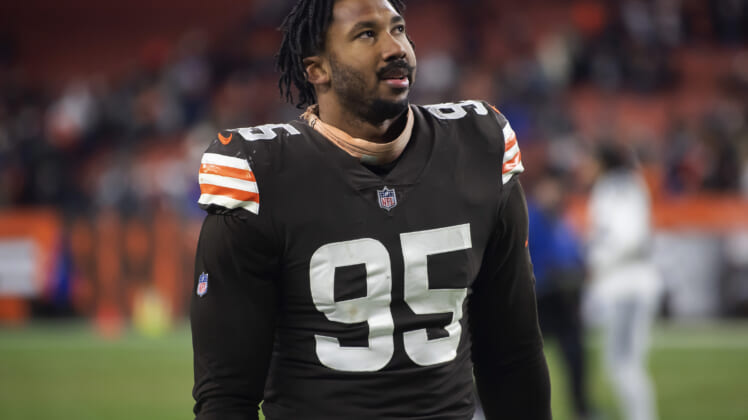 The Cleveland Browns took their players to the Pro Football Hall of Fame this week, serving as a break during mandatory minicamp. While many players enjoyed the tour, Myles Garrett skipped it for unique personal reasons.

Garrett, a first-team All-Pro selection in each of the past two seasons, prides himself on being around his teammates and serving as an integral part of the team culture. However, the 26-year-old also made a promise to himself years ago and he won’t go back on it.

After being drafted with the 1st pick in the 2017 NFL Draft, Garrett told the Akron Beacon Journal that he won’t step foot in the Pro Football Hall of Fame during his playing career. In fact, he won’t visit it unless voters determine he is worthy of experiencing football immortality.

Garrett’s stance on the Hall of Fame is certainly unique. Located in Canton, Ohio, nearly tens of thousands of football fans step foot into the building to experience NFL history. Players are also among the visitors, especially when the NFL hosts the Pro Football Hall of Fame Game to kick off the preseason.

Clearly one of the best players in the NFL sees the sanctuary for football greatness differently. If he ever wants to experience what it’s like inside the Pro Football Hall of Fame, he views a bronze bust as his ticket for admission.

Is Myles Garrett a Hall of Famer?

If Myles Garrett retired before the 2022 season, he certainly wouldn’t have the production nor career longevity to make it into the Pro Football Hall of Fame. However, the 6-foot-4 edge rusher is on track to make a strong case when he walks away from football.

Despite missing eight games between the 2019-’20 seasons, Garrett has still racked up 51.5 sacks and 98 quarterback hits over the last four years. Viewed as a generational pass-rushing prospect entering the NFL Draft, he is living up to the hype.

Heading into his age-26 season, it’s realistic to think Garrett can play at least another eight years. Pass rushers still perform at a fairly high level into their 30s. For example, 32-year-old Cameron Jordan recorded 12.5 sacks last season and 32-year-old Chandler Jones is coming off a 10.5-sack campaign.

With the NFL now having teams playing a 17-game schedule, it’s a safe bet that Garrett should average at least 12 sacks per season over the next five years. If he maintains that pace, he’ll reach 100 career sacks by 2025.

With a few years left in the tank to add on to his totals, Garrett could reach 135-plus sacks in his career before he hangs up his cleats. Considering only 24 players have reached the 130-sack mark and a majority of them are already in the Hall of Fame or will be inducted in the years ahead, it’s a good target for Garrett.

As long as he stays healthy and maintains his level of play through the 2030 season, Garrett will earn himself a trip to Canton, Ohio.