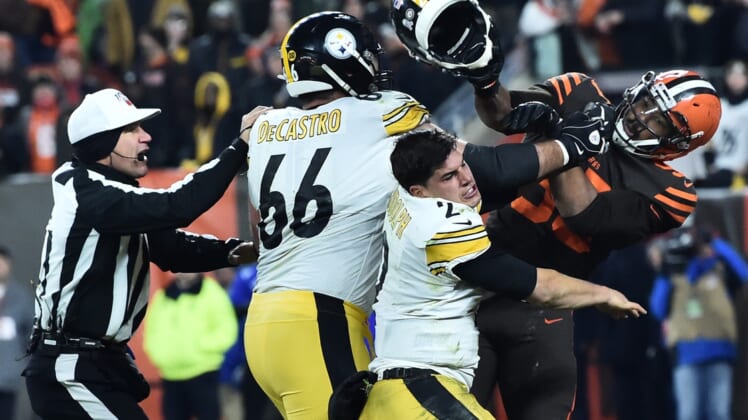 Thursday took on a whole new meaning when it comes to the entire Myles Garrett suspension controversy.

Apparently, this is what led to Garrett losing his mind on the field, eventually ripping off Rudolph’s helmet and hitting the signal caller in the head with it.

In talking about the incident in question and the above-mentioned allegations, Garrett took to Twitter to release a statement Thursday evening.

“I was assured that the hearing was space that afforded the opportunity to speak openly and honestly about the incident that led to my suspension,” Garrett wrote. “This was not meant for public dissemination, nor was it a convenient attempt to justify my actions or restore my image in the eyes of those I disappointed.”

Garrett then addressed the elephant in the room, his allegations against Rudolph.

“I know what I heard. Whether my opponent’s comment was born out of frustration or ignorance, I cannot say,” Garrett continued. “But his actions do not excuse my lack of restraint in the moment, and I truly regret the impact this has had on the league, the Browns and our devoted fans.”

Basically, Garrett is doubling down on the allegations while also noting that the alleged slurs don’t justify his actions.

Since the report of Garrett’s allegations broke, the NFL released a statement indicating that there’s no evidence to back the defensive end up in these claims. Those on the field for both teams also didn’t hear Rudolph go at Garrett with any racial slurs.