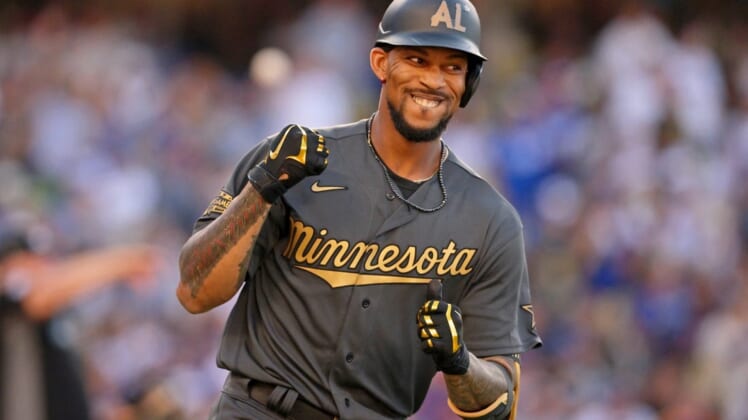 LOS ANGELES — Giancarlo Stanton and Byron Buxton hit back-to-back home runs and the American League extended its All-Star Game winning streak to nine games with a 3-2 victory over the National League on Tuesday at Dodger Stadium.

Stanton, a Los Angeles-area native from the New York Yankees, hit a two-run shot in the fourth inning, and the Minnesota Twins’ Buxton followed with a solo shot. Both home runs came off Los Angeles Dodgers right-hander Tony Gonsolin. Stanton was named the game’s MVP.

The St. Louis Cardinals’ Paul Goldschmidt hit a home run and the Dodgers’ Mookie Betts had an RBI single for the NL, which last won an All-Star Game in 2012 at Kansas City.

Gonsolin gave up three runs on four hits in his one inning of work to take the loss. Houston Astros left-hander Framber Valdez pitched a scoreless third inning to earn the victory.

American League leadoff man Shohei Ohtani of the Los Angeles Angels provided some instant drama when he said on national television from the on-deck circle that he would swing at the first pitch from NL starter Clayton Kershaw of the Dodgers. He did and singled.

Kershaw finished off a scoreless inning before the NL’s offense went to work against AL starter Shane McClanahan of the Tampa Bay Rays. The Atlanta Braves’ Ronald Acuna Jr. led off with a ground-rule double and Betts brought him home with a single.

The San Diego Padres’ Manny Machado grounded into a double play before Goldschmidt homered to left-center.

The AL had just Ohtani’s single until the fourth inning. The Cleveland Guardians’ Jose Ramirez singled before Stanton blasted a one-out home run to left-center to tie the game 2-2.

Ramirez went 2-for-2 in his fourth All-Star Game.

Guardians right-hander Emmanuel Clase struck out all three batters he faced in the ninth inning for the save. The last of 11 AL pitchers, Clase has 19 saves in 21 chances this season.

In his last All-Star Game, the St. Louis Cardinals’ Albert Pujols flied out to left field as a pinch hitter in the fourth inning. Pujols, who announced he is headed for retirement after 22 seasons, was playing in his 11th All-Star Game.