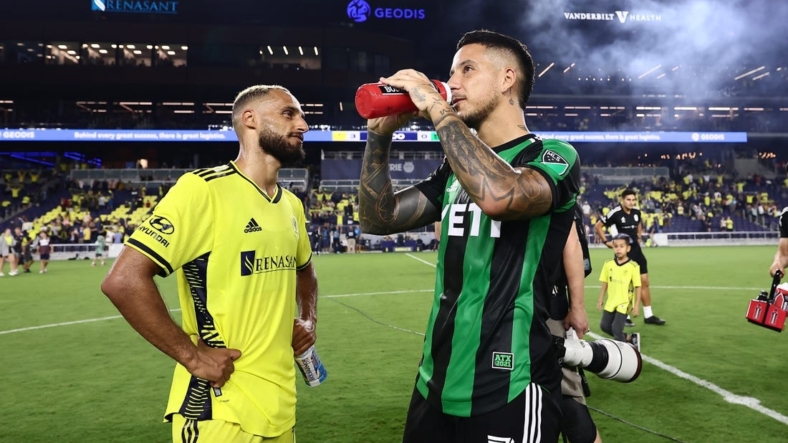 The two teams met just two weeks ago in Nashville, a 3-0 win for the hosts.

Mukhtar continues to lead the Golden Boot race over Austin’s Driussi with 22 goals and 11 assists on the season. Driussi has tallied 20 goals with seven assists. When their teams faced off two weeks ago, Mukhtar scored a brace to lead Nashville to victory.

Forward Moussa Djitte subbed on in the 58th minute and scored all three goals for Austin. He is the first player to score a hat trick as a sub since Chris Wondolowski in 2010 and only the sixth player ever in league history. It was also the first hat trick in Austin FC history.

“Moussa has a physicality that there’s not a player on their team that can deal with Moussa individually on a one-v-one,” Austin FC coach Josh Wolff said after the game.

Djitte had scored only one goal this season before his hat trick.

Nashville (12-9-10, 46 points) had their four-game winning streak come to an end with a 1-1 draw at home against the Los Angeles Galaxy. Mukhtar opened the scoring with a 29th-minute penalty kick, but Nashville could not hold on in second-half stoppage time. Walker Zimmerman was sent off with a second yellow due to a handball in the box seven minutes into stoppage time. Former FC Barcelona player Riqui Puig converted the penalty to force the draw.

“Given the standards that we’ve set over the last, certainly the last four games, we certainly dipped below that,” Nashville coach Gary Smith said. “There were some guys I’m sure will look at their performance and say we’re definitely better on the ball than that for sure.”