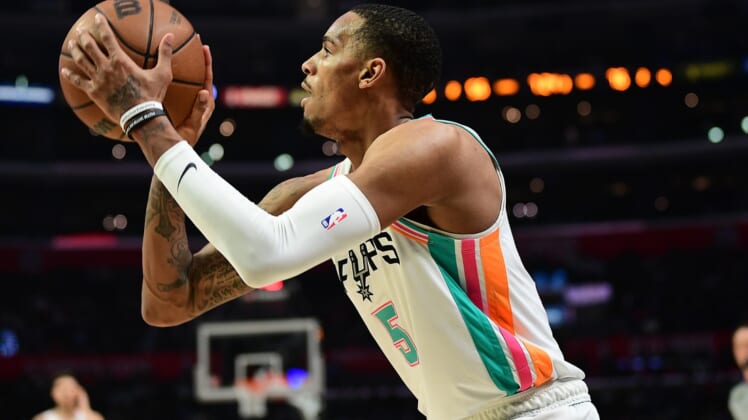 It’s almost as if there will be a pair of home teams when the San Antonio Spurs visit the Los Angeles Lakers on Thursday.

The Spurs have taken up residency in L.A., arriving Sunday in advance of a convincing 116-92 victory over the Los Angeles Clippers on Monday when their energy was flowing. The Spurs put up 114 shots from the field — making 50 — and grabbed 23 of their 66 rebounds on the offensive end.

Dejounte Murray was the super-sized battery that charged it all, finishing with his third triple-double in his past five games. Murray’s 24-point, 11-rebound and 13-assist effort had the Clippers on their heels all night as he went 10 of 22 from the field and 4 of 6 from 3-point range.

Murray leads the Spurs in both points (18.1) and assists (8.6), while averaging 10.4 assists per game over his last five contests. San Antonio is 3-2 over those five games, with the three victories coming during Murray triple-doubles.

“I take pride in being a pass-first guy, knowing that I can score, knowing that I’m going to get shots,” Murray said. “For me, it’s just getting that balance, now. And it’s going to come over time. For me, I want guys to love playing with me. I think that’s rare in the league.

“You have a bunch of score-first point guards and I want to be that guy where guys are like, ‘I love playing with him.’ I take pride in that.”

The Spurs had two free days in Los Angeles to work on a gameplan for the Lakers, even getting a chance to see their opponent play Tuesday. Plagued by a key injury, as well COVID-19 absences, the Lakers were also without head coach Frank Vogel in Tuesday’s 108-90 loss to the Phoenix Suns.

With Anthony Davis out at least four weeks with a sprained knee ligament, LeBron James went down in the third quarter with an ankle injury. He remained in the game and said he intends to play Thursday but is listed as questionable.

James has tried to be the all-everything the Lakers need right now, but try as he might, the team is on a three-game losing streak. With Davis out the past two games, James has averaged 32.5 points and 10.5 rebounds to no avail.

The Lakers had Kent Bazemore, Malik Monk, Avery Bradley and Austin Reaves still in COVID protocols Tuesday, along with Vogel, while Talen Horton-Tucker and Dwight Howard returned from protocols.

After missing three games, Horton-Tucker had just three points against the Suns on a rusty 1-of-13 shooting (0 of 8 on 3-pointers). New arrival Isaiah Thomas also had a rough night, scoring three points on 1-of-11 shooting from the floor and 0 of 6 from 3-point range.

“The hard part is, like I told them, is just the switch that we have to make in ourselves,” Lakers acting coach David Fizdale said. “We got a bunch of stars and we can’t have a lot of guys turning the ball over and a lot of guys missing block outs, or expecting somebody else to do the dirty work. We all have to do it. We all have to be role players.”