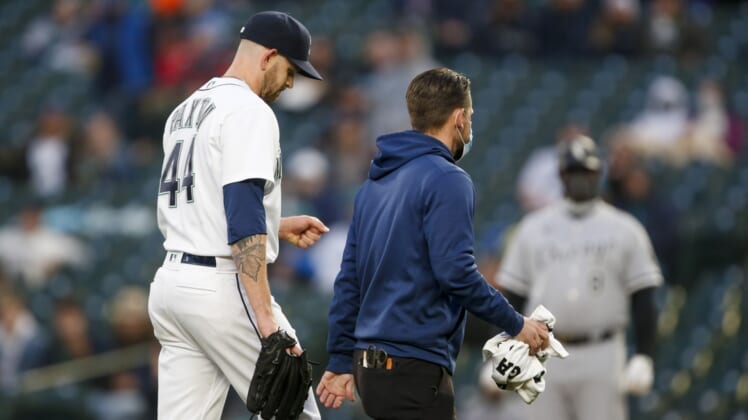 Right-hander Lucas Giolito (1-0) struck out 10 in 5 1/3 innings for the White Sox, who have won the first two games of the series. The teams wrap up the three-game set Wednesday afternoon.

Collins’ three-run shot to right center off Nick Margevicius (0-1) broke a scoreless tie in the second inning. After the Mariners tied it, Robert lined a two-run homer over the left field wall in the fifth off the left-hander to make it 5-3.

Abreu, who had a sacrifice fly in the seventh, added a grand slam into the upper deck in left field off right-hander Keynan Middleton in the eighth.

Giolito, who allowed three runs on four hits, retired the side in order in three of his five full innings, and only allowed a walk in one of the others.

The only inning in which Giolito struggled was the third, when the Mariners scored three times.

Seattle’s Luis Torrens led off with a single to left field before Jake Fraley grounded into a forceout and stole second. J.P. Crawford singled to right, sending Fraley to third. Mitch Haniger lined a run-scoring single to left, with Crawford taking second.

After a mound visit, Giolito gave up a run-scoring double to left by Ty France. Kyle Seager swung at a third strike, but the pitch was wild, allowing Seager to reach first and Haniger to tie the score. Giolito then struck out Evan White and Taylor Trammell to end the inning.

Dylan Moore’s ground-rule double leading off the bottom of the ninth led to the game’s final run.

Mariners left-hander James Paxton, making his first start of the season, left after 1 1/3 innings with what the team later described as left elbow discomfort.

Margevicius gave up four runs on four hits in 3 2/3 innings of relief, with one walk and four strikeouts.