As the Pittsburgh Steelers prepare to open training camp on July 22, general manager Kevin Colbert may not be done adding to the team. Signing Melvin Ingram could prove to be one of the best moves of the offseason for the Steelers.

While Ingram is talented, there are several other players who could help Mike Tomlin win some more games in 2021. Here are three improvements the Steelers should look into before Week 1. 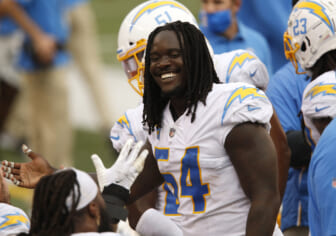 The Steelers’ offensive line remains one of their biggest question marks ahead of the 2021 season. With David DeCastro dealing with injuries, the Steelers let him go. Five-time Pro Bowl guard Trai Turner will take his place. After dealing with some health concerns of his own in recent seasons, the hope is Turner can return to top form in Pittsburgh.

Aside from Turner, the entire line is largely unproven. If the Steelers don’t feel confident about their internal options to replace Al Villanueva at left tackle, two-time Pro Bowl Russell Okung remains available. Ironically, Okung and Turner were traded for each other ahead of the 2020 season. 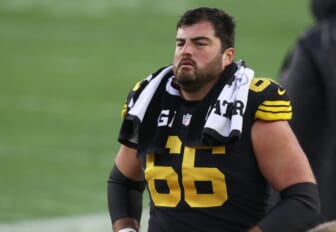 While Okung has only played in 13 games over the past two seasons, the word is he’s healthy and looking for the right opportunity again. When he’s at his best, Okung has been one of the best left tackles in football since 2010. Having Okung to protect Ben Roethlisberger’s blindside could be a big improvement over Chukwuma Okorafor.

It’s important to note, Okorafor’s grade is from him playing right tackle. This season, he’s projected to move to the left side.

After 11 NFL seasons, longtime Steelers center Maurkice Pouncey retired. Competing to snap the ball to Big Ben are J.C. Hassenauer, B.J. Finney, and third-round rookie Kendrick Green. Finney didn’t see the field for any offensive plays in 2020. Hassenauer saw the field for the first time last season but was graded at 57.7 by PFF in 303 plays.

It’s an underwhelming group, to say the least. Selected 87th overall out of Illinois, Kendrick Green might be the best option, even if he’s more experienced as a guard. If the Steelers get to camp and don’t like what they see, it’s possible they could look to the free agent market for an improvement.

Austin Reiter has started 32 games for the Kansas City Chiefs since 2018. Last season, he finished with a 70.9 grade according to PFF. In 867 snaps, Reiter didn’t allow a sack or commit a penalty. Still unsigned, Reiter likely wouldn’t cost much if the Steelers wanted a more experienced option in the middle.

In a bit of a surprise move this offseason, the Steelers released Steven Nelson to save some money on their cap. Nelson started 30 games the past two seasons, yet the Steelers have yet to address the cornerback position since his release.

There are solid options remaining in free agency such as Brian Poole or Nickell Robey-Coleman, but they have yet to be brought in for a visit to Pittsburgh. Let’s aim higher.

This offseason, the Denver Broncos drafted Patrick Surtain II in the first round and signed Kyle Fuller and Ronald Darby. Where does that leave Bryce Callahan? In 2020, Callahan graded at 84.1 with PFF and was named their 36th-best player of the year. He excelled playing both in the nickel role and outside.

In Pittsburgh, Callahan could either play opposite of Joe Haden or cover slot receivers. GM Kevin Colbert has shown a willingness to trade for key members of the secondary before with Minkah Fitzpatrick, a Callahan trade could make sense. The Steelers are projected to receive a third-round compensatory pick in 2022 from losing Bud Dupree, so they may have some extra firepower to work with.