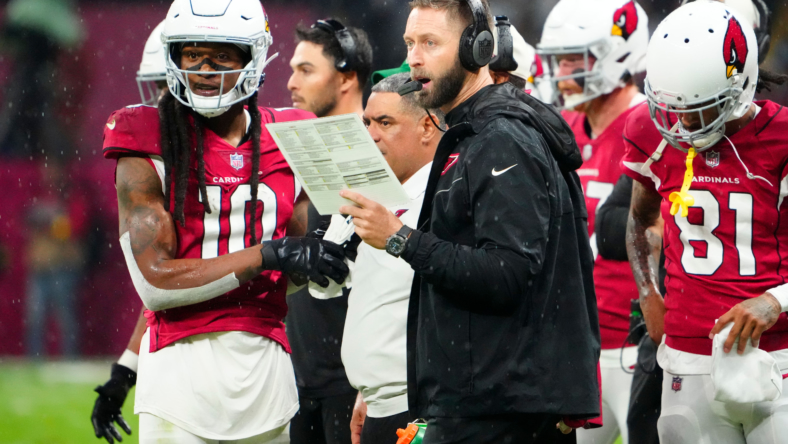 There’s no better time to start dreaming of better results in 2023 than after another bad Arizona Cardinals loss. Getting blown out in Mexico City by the San Francisco 49ers, even without Kyler Murray in the lineup, should leave a bad taste in everyone’s mouths.

It’s not that the 49ers aren’t a good team, they’ll likely take the NFC West, but the Cardinals should have been more prepared to go to battle. We just didn’t see enough effort, as Budda Baker said after the game.

So what are some things the Cardinals need to do to avoid another bad season in 2023? Let’s dive into the desert.

Four years into the Kliff Kingsbury experiment, and it’s safe to say it’s been a failure. Sure the Cardinals managed to reach the postseason a year ago, and they could very well be on track to get back in 2023, but seeing the team’s inconsistency should be a red flag to this point.

Kingsbury went 35-40 across six seasons coaching Texas Tech in college, finishing with a win percentage of just .467. He had just two winning seasons, going 8-5 in his first year and then 7-6 two years later, once again showing his inconsistencies.

Yet, in the NFL, the results have been the exact same. In four seasons of Kingsbury coaching the Cardinals, he’s led an 18-30-1 effort for a win percentage of .475. And just like we saw in college, he can’t maintain momentum from one year to the next.

Kingsbury was supposed to be this advanced offensive mind who brought a spread offense to pro football, yet there was some outlying belief that this time it could work. It hasn’t. The Cards attempt the third-most passes per game, yet have a net yard average of just 5.2 yards per attempt, which is the second-lowest mark in football.

Obviously, this is far from being an explosive offense, but if Kingsbury can’t bring that to the table, why is he even coaching the Cardinals?

Perhaps part of Arizona’s constant up-and-down performances has to do with having so many veterans who we thought could help them win now. Except we’ve seen this team continue to be set back by various injuries. Of course, it’s not just the elder folk who are at fault (no one is really at fault for getting hurt), as Murray has also missed time too.

Yet, these various ailments aren’t likely to improve as vets such as DeAndre Hopkins, Rodney Hudson, and J.J. Watt continue to climb on the wrong side of 30. It’s hard to argue that the Cardinals are lacking talent, but when you look at the age of their best players, you realize they need a lot more youth.

Adding young players whose ceilings could take this team over the top could end up being the key factor toward a much bigger turnaround. Keeping all these vets around, that’s not going to drastically improve the team from one year to the next.

Perhaps the biggest singular shift that can make the Cardinals into an annual contender is by abandoning the pass-heavy approach and becoming a run-based offense. It may seem unconventional, as that’s not why they selected Murray No. 1 overall, and we see so many other offenses look nearly unstoppable with high-powered passing attacks, but it’s time to get a bite of reality.

The Cardinals just aren’t close to being one of the best passing teams in football. Yet, it’s impossible to ignore just how electric Murray can be with his legs. There aren’t many players in the league who can stop and change directions on a dime while also using a jetpack to take off, leaving defenders in the dust.

We see Justin Fields finding sudden success in his second season simply by being allowed to carry the ball more often. How about instead of a college-like spread-based offense, we see an Oklahoma-like option-based attack?

It would take an overhaul of the offensive line, and of course, fans are begging for such a change in the trenches, but that’s exactly where Arizona needs to start. If they can’t give Murray time to throw, how can any offense be successful?

Yet, if the Cardinals can manage to build a respectable offensive line, they should also try an add a dynamic running back to form a two-headed monster with Murray and another speedster in the backfield. Instead of being a bottom-tier rushing attack, the Cards just might be able to have a top-five unit, taking a lot more pressure off Murray as a passer. At this point, what do they have to lose?