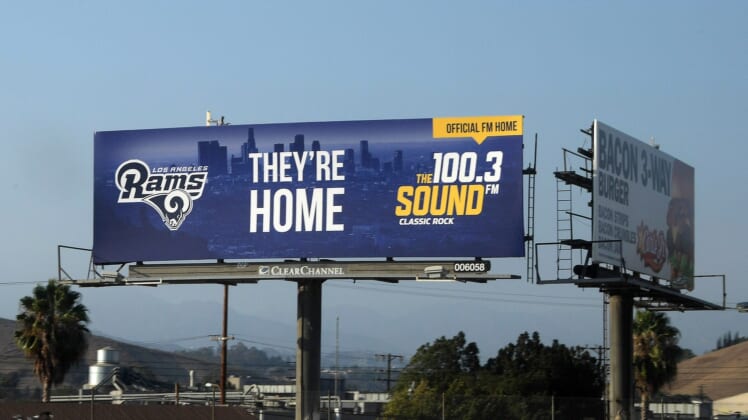 One of the biggest draws of a Los Angeles-based football team to the NFL is the large viewership market.

With a population of over five million residents in the greater LA area, the LA television market ranks second in the country behind only New York accounting for a whopping 4.775% of the US population.

With no team in the LA area, it was expected that the reintroduction of a team would be a major boost to local viewer ratings.

With the Rams relocating to LA, a team that had begun their initial run in the historic city in 1946, it was expected that the team would reconnect with longstanding fans and bring a massive increase in revenue compared to St. Louis, the nation’s #21 overall market.

With the team getting off to a hot 3-1 start, things looked promising.

See, Los Angeles is a fair weather city, for better or worse.

If a local team is winning, the fan base is rabid and loyal.

Look no further than the Glory Days of USC football in the mid-2000’s, when the Trojans were rattling off a remarkable 34 straight wins and the Coliseum was packed to capacity.

When said team falls on hard times, things change in a heartbeat. This was clearly evidenced by a few down years for the USC team that saw average attendance plummet from a peak of 91,480 in 2006 to a low of 73,126 in 2012.

Back to the Rams, after the 3-1 start things quickly soured into an eventual 4-12 season. Following suit, the TV rating were hit and hit hard.

The majority of Rams games were shown in LA by Fox, as was the case in St. Louis when they were there. According to Nielsen, which tracks viewership, Fox’s rating for NFL games declined in Los Angeles this season over last season’s figure, as pointed out by the St. Louis Post-Dispatch.

Amazing to comprehend for most outsiders, as local viewership tends to flock to support the home team’s games.

Nielsen reports that 8 percent of homes in the LA market tuned in to Fox’s NFL telecasts this season — down from 8.3 percent in 2015 when the Rams were in St. Louis.

Keep in mind, these figures are for all NFL games shown on Fox, not just those of the Rams. Fox carried 12 Rams games this season in LA, averaging an 8.3 rating. By comparison, in St. Louis the previous season, Fox affiliate KTVI averaged a 19.7 rating for its 12 Rams telecasts.

The biggest issue that many outsiders fail to realize regarding a Los Angeles team is the mindset of the majority of the city. LA residents see themselves as a cut above most others. As a result, they expect their teams to be the same if they’re expected to support them.

Take a look at the Lakers, for example, who developed a rabid fanbase when winning multiple championships but have experienced an attendance drop with the current rebuild of the young team.

Los Angeles is a tough place to gain support for a team who consistently underwhelms on the field, and local football fans would rather turn to watch teams who actually produce a solid on-field product.

Until the Rams can cultivate a winning culture, expect the Coliseum to be half-empty every home game, as LA is not a “build it and they will come” type of city.

You win, you gain your fanbase.

There is no other option.