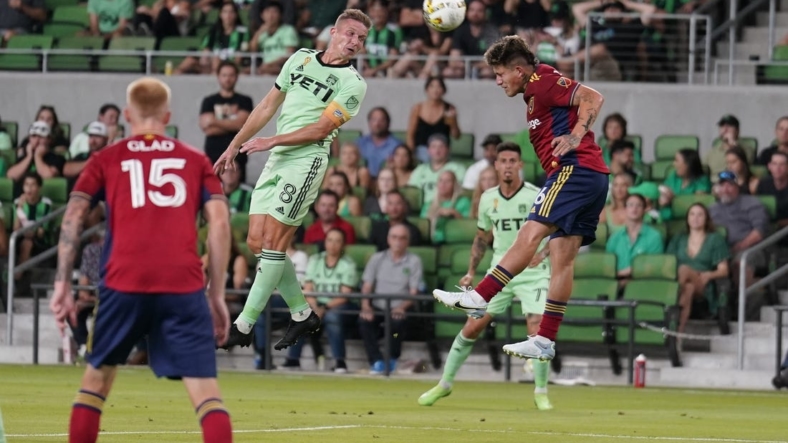 Substitute Moussa Djitte scored in the 60th, 76th and 80th minutes to complete the first hat trick in Austin FC history and lead his team to a 3-0 victory over visiting Real Salt Lake on Wednesday night.

Diego Fagundez provided assists on two of Djitte’s goals, which brought the Senegal native’s season total to four in 14 appearances, all but one of those coming off the bench.

Salt Lake (11-10-10, 43 points) was held scoreless for a third consecutive match in another blow to their own postseason hopes despite being arguably the more dangerous side in the opening 45 minutes.

RSL began the night three points in front of the LA Galaxy for the seventh and final playoff place, with the Galaxy playing later Saturday at Vancouver.

Djitte began his night in the 58th minute when he entered for Maximiliano Urruti, and he had Austin in front on his first involvement in the match.

Julio Cascante sprayed a ball wide for Fagundez on the left, and Fagundez curled in a cross toward the edge of the 6-yard box.

Djitte held his run to remain onside and raced onto the cross, meeting it with a first-touch half-volley to poke it past goalkeeper Zac MacMath, who might have reacted late on the play.

Djitte, 22, doubled the advantage 16 minutes later with some quick thinking. Ethan Finlay struck a half-volley off the crossbar, and Djitte was first to reach a headed half-clearance on the right side of the penalty area. He hammered a low half-volley past MacMath and inside the left post.

Djitte completed the hat trick four minutes later with maybe his easiest chance of the night, finding himself alone on the back after Ruben Gabrielsen flicked on Fagundez’s cross.

Again it was a low shot to finish off the sequence that left MacMath little chance.

Austin goalie Brad Stuver finished with six saves, while MacMath was credited with no saves.