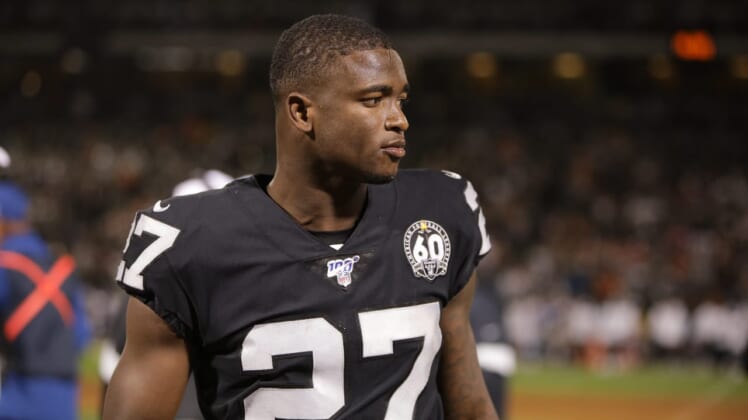 This week the Raiders said goodbye to a former first-round draft pick in cornerback Gareon Conley. So what are Mike Mayock and Jon Gruden doing to bolster their pass defense?

During former general manager Reggie McKenzie’s tenure, Oakland Raiders fans wanted to see a more aggressive approach in terms of molding the roster. Since owner Mark Davis hired Jon Gruden, we can’t accuse the head coach of sitting on his hands. Instead, he’s always open for business in an attempt to build a contender.

The Raiders traded 2017 first-rounder Gareon Conley to their Week 8 opponent, the Houston Texans, for a third-round pick Monday. The transaction initiates an immediate shakeup at cornerback. Gruden took note of the defense giving up big plays during the team’s 42-24 loss to the Green Bay Packers Sunday.

“We got beat bad on the first play of the second half against man-to-man coverage,” Gruden said. “Didn’t play the route very well. We gotta eliminate the explosive plays. We just can’t give up big chunk yardage plays, and that’s going to be an area of emphasis, as it has been.”

Packers wide receiver Marquez Valdes-Scantling hauled in 59- and 74-yard receptions—the latter for a touchdown with Conley lost in coverage. Gruden probably saw a flashback of last season when his defense gave up a league-worst 7.8 net yards per pass attempt.

Gruden didn’t want to see that nightmare again. He dropped Conley like a hot potato, but Sunday was probably the last straw for the Ohio State product. Despite a decent sophomore campaign, logging 15 pass deflections and three interceptions, he seemed to regress this year.

According to Pro Football Focus, Conley allowed 18 receptions for 266 yards and four touchdowns with one interception on 26 targets. The numbers don’t stack up in his favor, but as ESPN’s Jeremy Fowler points out, there could be more to the team’s decision.

Regardless of the reasoning, the Raiders will embrace a youth movement in the secondary. With Conley out of the picture, what’s next?

Gruden seems confident in a young core. At the podium, talking to reporters, he spent a short period talking about a trio of rookies and a veteran whom the team acquired during free agency.

We haven’t seen Trayvon Mullen on the field for significant snaps since Week 3. Since then, he’s played 14 defensive snaps. He didn’t have a lot of preseason reps either.

Nonetheless, the Raiders selected Mullen in the second round of this year’s draft. The coaching staff has to allow him to sink or swim with the pros.

The 6-foot-1, 199-pound cover man has the closing speed and awareness to tighten cushion gaps and prevent chunk plays, which is exactly what Gruden wants to see out of his perimeter defenders.

As a junior at Clemson, Mullen didn’t see much action. Quarterbacks chose to target the other side of the field and avoid the athletic, long cornerback in coverage. So, we can’t assess his potential based on statistics.

Looking at his collegiate tape, Mullen needed to refine his footwork and watch out for double-moves that can loosen his coverage downfield. We’ll see if that becomes a factor in the upcoming matchup when he lines up opposite Kenny Stills or Keke Coutee.

The 6-foot-1, 199-pound cover man has the closing speed and awareness to tighten cushion gaps and prevent chunk plays, which is exactly what Gruden wants to see out of his perimeter defenders. With limited playing time during the summer, Mullen will experience some ups and downs in his first potential start.

Lawson isn’t part of the youth movement at cornerback, but he’s new blood. The 28-year-old served a four-game suspension and lined up for 23 snaps on special teams against the Packers. Because of his versatility, the sixth-year veteran could see time on the perimeter and in the slot.

Despite his inside-out capability, Lawson isn’t a good blanket matchup against just any wide receiver. At 5-foot-9, 190 pounds, bigger pass-catchers will leap over or attempt to outmuscle him for contested targets. The former Detroit Lion has 25 pass deflections and zero interceptions, which indicates a deficiency in his ball-tracking skills.

Lawson isn’t a long-term component to the secondary with Daryl Worley and Mullen on the perimeter while Lamarcus Joyner continues to man the slot. He’s veteran insurance in case Gruden’s patience runs thin with the rookie or defensive coordinator Paul Guenther decides to move Joyner out in centerfield as a pure safety.

Nixon earned his roster spot with a stellar preseason showing, allowing just five receptions for 37 yards on 15 targets, per Pro Football Focus. In exhibition action, he played like an unfounded gem with some swagger. If Mullen stumbles out of the gate, don’t be surprised to see the undrafted rookie on the field.

On the collegiate level, Nixon had some ball production in FBS competition. Transferring from Arizona Western Community College to South Carolina, he logged nine pass breakups, two interceptions and a defensive score in two terms.

Similar to Mullen, Nixon has the size (6-foot, 201 lbs) and speed to play on the professional level. He’s also susceptible to falling behind a step against refined route-runners but uses athleticism to compensate for those miscues.

During the summer, Nixon didn’t show many lapses in coverage or a lack of awareness in shadowing quick-twitch wide receivers. With that said, he faces a bigger challenge on the active regular-season roster with a chance to play. On a brighter note, the 22-year-old has some momentum and confidence to build upon as a possible component to a young secondary.

In the absolute best-case scenario, Mullen would start on one end and Nixon could become an option on the opposite side if Worley doesn’t return next season. If he doesn’t, the Raiders will need to find a first-stringer in free agency or the 2020 draft.

Isaiah Johnson is the rawest talent among the youngsters at cornerback. Even though the Raiders selected him in the fourth round of this year’s draft, the coaching staff should tread lightly with the former collegiate wide receiver. He shifted to cornerback for his last two terms at Houston.

At 6-foot-2, 208 pounds, Johnson has great length on the perimeter. As a former wide receiver, he’s capable of racking up interceptions with ball-tracking skills. Because of his stature, pass-catchers will have a difficult time beating him on contested targets or gaining a step downfield for big plays.

If the coaching staff can develop Johnson’s technique, teaching him to move his feet for positioning rather than panicky hand-fighting, the former Cougar could become a solid contributor in the near future.

Realistically, Johnson will likely handle more special teams duties than defensive assignments this year. He only took the field for two coverage snaps during the preseason because of a facial fracture that landed him on injured reserve.

Without much activity through the summer, Johnson must catch up to speed on defense before taking the field for a significant number of snaps in coverage.

The Raiders need to do something to shore up what continues to be an ineffective secondary. For the remainder of the 2019 season, it appears they’re going with the addition by subtraction approach hoping the next man up approach works.