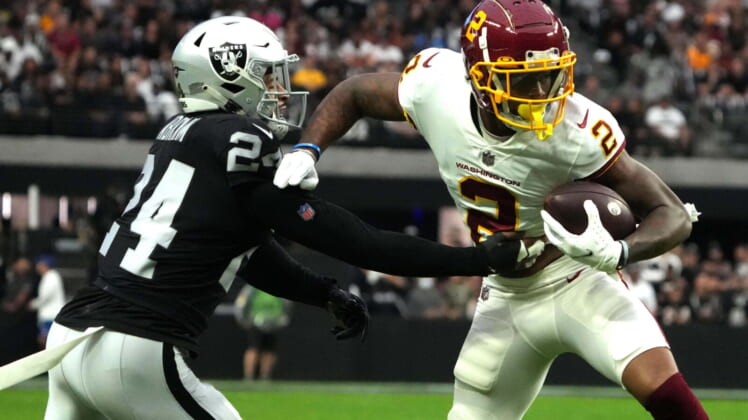 On Sunday, the Las Vegas Raiders didn’t have tight end Darren Waller (knee) in action. They lost running back Kenyan Drake (broken ankle) in the first half. The referees could’ve called pass interference on safety Bobby McCain on the final drive. Yet, the Raiders still had a chance to win the game.

While we can easily point to the above reasons for a 17-15 loss to the Washington Football Team, critics should highlight matters that the Raiders could’ve controlled in their attempt to go 7-5 and stay within the division title and playoff races.

Despite outgaining Washington 310-298 in yards and avoiding turnovers, the Raiders continued to struggle on third down, going 2-for-8. They didn’t fully capitalize off their only takeaway—settling for a field goal after cornerback Nate Hobbs intercepted a pass near midfield.

Interim head coach Rich Bisaccia stepped to the podium and talked about missed opportunities in the passing game, starting with the red zone.

“In the red zone, I just think we missed some throws down there today, and we had Zay [Jones] in the corner I thought,” Bisaccia said. “…We had Foster [Moreau] in the seam early in the game.”

Carr has been aggressive for a good portion of the campaign but in critical moments, he’s prone to fall back into checkdown mode, which has hurt this team in some situations, particularly early in games.

“I thought early he was under a little bit of duress trying to get the ball downfield,” Bisaccia said. “…We had one that we might have missed early in the game on a route for us where we had DeSean [Jackson] down there. Looks like we just kind of missed it, we end up checking the ball down.”

Bisaccia’s postgame commentary sounded similar to his thoughts about the last home loss to the Cincinnati Bengals. For multiple reasons, the offense didn’t push the ball downfield enough and failed to execute in key areas, specifically in the red zone.

Carr has been aggressive for a good portion of the campaign but in critical moments, he’s prone to fall back into checkdown mode, which has hurt this team in some situations, particularly early in games.

As Bisaccia mentioned, Carr opted for checkdown options rather than target pass-catchers downfield and missed key throws. The Raiders didn’t have their foot on the gas pedal, and they only scored 15 points.

Sure, rookie safety Tre’von Moehrig could’ve sealed a win for Las Vegas with an interception but dropped it, though a team should win when its defense holds an opponent to 17 points.

In half their contests this year, the Raiders have scored 16 points or fewer. Even with an improved defense, that’s not good enough to win games against formidable competition down the stretch.

With that said, running back Josh Jacobs spoke about a familiar issue that’s plagued this team over the past couple of years.

When asked about Vegas’ slow starts, Jacobs started with a big-picture outlook during his postgame press conference.

” I think it’s a mindset…,” Jacobs said. “…We kind of just coast a little too much…I feel like we just come in stiff and dull in games sometimes…”

Somehow, in the middle of a tight AFC playoff race, coming off two embarrassing home losses to the Kansas City Chiefs and Bengals with jobs on the line, the players still need more motivation to perform at a high level for a full 60 minutes.

In half their contests this year, the Raiders have scored 16 points or fewer. Even with an improved defense, that’s not good enough to win games against formidable competition down the stretch.

Jacobs told reporters that he expressed his frustration but also points the finger at himself. He admitted to running the wrong way on a few plays and takes on the responsibility of pumping up the team vocally and with his performance on the field. On the other hand, the 23-year-old said that he doesn’t have all the answers either.

Jacobs shouldn’t have to come up with the magic elixir for the Raiders’ lack of urgency by himself. Collectively, the team’s leadership from the front office to the players must come together and figure it out.

Last year, Carr talked about a similar issue, going into games flat, and fullback Alec Ingold focused on the need for a higher level of commitment. While many wanted to believe this squad differed from the 2020 and 2019 teams, the same problems with motivation and playing up to the competition in big moments still exist in 2021.

Going into Week 13, Vegas ranked 21st in first-half scoring, per Team Rankings. In some games, the offense managed to recover for a comeback victory, but lately, the unit has played inspired football a little too late.

Now, the Raiders have lost four of their last five games, and they’re looking toward a tough finish through January, playing three of the next five contests on the road with all those games against clubs with records of .500 or better (three within the division).

If the Raiders don’t come out with more urgency next week, prepare for a step backward in terms of their final record followed by an offseason that could bring significant changes from the front office to key positions on offense.