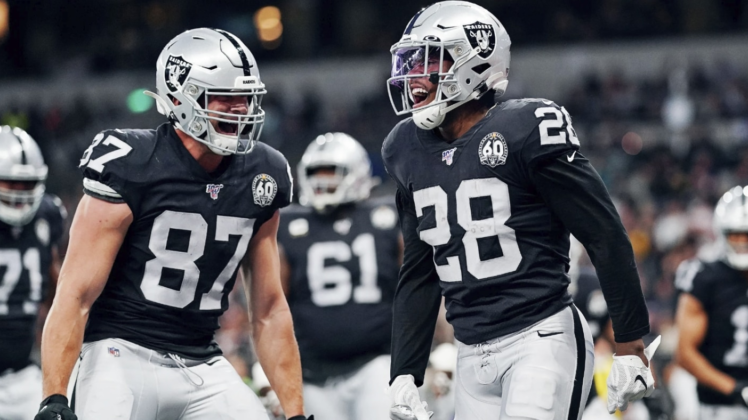 With the Raiders in the midst of their bye week, our own Moe Moton looks at an Oakland team that’s finally carving out who it is through five games in 2019.

Good businesses have a refined identity. Dunkin’ Donuts takes pride in their circular pastries. Popeyes finds clever ways to sell its chicken. Parallel to those companies, NFL teams must establish their strengths to win football games—and the Oakland Raiders did that in London against a rough-and-tough Chicago Bears team.

Many viewed the Raiders-Bears contest as Khalil Mack’s revenge game, but instead, Oakland’s performance sent a clear message, “we’re a physical football team without you.”

After a year of comparisons between Mack’s sack count vs. the Raiders as a team, the three-time All-Pro finished without one and hit the quarterback once Sunday. According to Pro Football Focus, he lined up as a pass-rusher nine times on the left and 18 snaps on the right. Kolton Miller and Trent Brown stood their ground.

Clearly, Hurst had enough of outside chatter about the former Raiders star and much of the fanbase shared his sentiment.

Perhaps, now we can get over the talk about 13 (sacks) from last year and discuss Sunday’s 4-0 count in favor of the Silver and Black.

What are the Raiders? A Physical Football Team in All Phases

Beyond the ability to keep Mack in check, the Raiders showed utter dominance in the first half:

Fan, foe or objective analyst, Oakland shocked the masses and outmuscled the Bears’ reputable front line. Yes, defensive end Akiem Hicks exited the game on the first drive with an elbow injury, but the Bears front seven still featured interior tackles Nick Williams and Roy Robertson-Harris who combined for 6.5 sacks coming into Week 5. Roquan Smith, Danny Trevathan, Leonard Floyd, and Mack didn’t stir up much noise on the second level against the run or on the edges.

Oakland chose to play big-boy bully football and that plan worked in its favor—impressive against a top-five defense in yards and points allowed.

Running back Josh Jacobs ran the ball straight into the teeth of Chicago’s defense and probably knocked a few loose with his downhill carries. Oakland chose to play big-boy bully football and that plan worked in its favor—impressive against a top-five defense in yards and points allowed.

Quarterback Derek Carr picked his spots to deliver quick passes to mix with an effective ground attack. He found tight end Foster Moreau twice for 23 and 16 yards on the go-ahead drive.

Overall, Jacobs ranks sixth in rushing yards (430). Oakland’s offensive line lists third in adjusted line yards (5.06) and eighth in pass protection, per Football Outsiders, an indication this offense will run over its opponents. That’s what we saw at Tottenham Stadium.

This contest had a similar feel to Week 9 of the 2016 campaign when the Raiders mowed over the Denver Broncos’ vaunted defense in the Sunday Night Football prime-time slot. Carr threw for 184 yards in that contest, but Oakland logged 218 yards on the ground. In this scenario, one man, Jacobs, did most of the pounding.

Through five weeks, Jacobs should be the frontrunner for Offensive Rookie of the Year.

While Jacksonville Jaguars quarterback Gardner Minshew II has a strong argument for the honor (1,279 yards, nine touchdown passes and an interception), Jacobs has provided the Silver and Black with an offensive identity that can win games, close them out as we saw in Indianapolis and wear down opponents through four quarters.

Furthermore, Jacobs had a major role in all three of Oakland’s victories, logging 66 carries for 287 yards and four touchdowns on the ground.

What are the Raiders? Flawed But Resilient

Don’t forget the Raiders came into Week 5 without Tyrell Williams, their No. 1 wide receiver, because of a foot injury. The league suspended linebacker Vontaze Burfict for the season – a suspension upheld in New York today. Chicago held Oakland’s top pass-catcher Darren Waller to four catches for 39 yards.

Yet, Carr spread the football, completing passes to nine different pass-catchers. In a postgame interview with NFL Network’s Stacy Dales, Jacobs owned responsibility on a miscommunication with his quarterback during a toss in the third quarter that swung the momentum in the Bears’ favor:

Despite the youth and inexperience, the Raiders haven’t flinched this year. Wide receiver Antonio Brown’s offseason antics only seemed to fuel the team going into the season opener with the Broncos.

Safety Erik Harris has stepped into a larger role following Johnathan Abram’s season-ending shoulder injury and produced impact plays. He recorded the Raiders’ first interception on a pick-six that essentially sealed a victory against the Indianapolis Colts in Week 4. The 29-year-old also ran for a first down on a fake punt during the go-ahead drive Sunday.

Without Burfict on the field, Nicholas Morrow leaped up and snatched an interception to kill a drive on third down and set up a short field. Running back DeAndre Washington capped the following sequence with a rushing score.

Despite a third-quarter collapse, the Silver and Black pulled together to score the final touchdown, going 97 yards down the field against the Bears’ fifth-ranked defense in yards and No. 2 defensive scoring unit.

So yes, the Raiders gave fans like Portland Trail Blazers guard Damian Lillard, multiple scares, but the team didn’t fold in the face of adversity:

They kept pushing for a quality victory at less than full strength without Williams or Burfict in uniform. Kudos to head coach Jon Gruden, the coaching staff and the leaders in the locker room for keeping their heads together and in the game.

Through five weeks, we can certainly give credit to the Raiders’ toughness—both on the field and mentally. Outside noise, injuries and in-game stalls have not shook this squad. Instead, they’ve continued to battle.

What are the Raiders? A Quick-Start Team

The Raiders don’t give opponents a chance to feel them out—they attack right away. Clubs with methodical or low-scoring offenses will struggle to beat Oakland. Gruden’s offense immediately pounces on its opponents, averaging 13.8 points in the first half, which lists eighth in the league, per Team Rankings.

The Broncos, Colts, and Bears all fell into a 14- or 17-point deficit before halftime.

The Silver and Black average 6.8 points in the second half, per Team Rankings, 30th in the league.

Those teams rank 15th or worse in scoring. None of them survived the Raiders’ early offensive flurry.

Here’s where the flawed portion of this team comes into play. The Silver and Black average 6.8 points in the second half, per Team Rankings, 30th in the league. A high-powered offense may have the assets to climb out of an early hole against the Raiders’ 22nd-ranked scoring defense. Nonetheless, it’s a tough task to play from behind—one mistake can ruin a comeback bid—just look at the Bears’ roughing the kicker penalty in the fourth quarter of the last outing.

Essentially, quick starts have become a staple for this team under Gruden. While second-half adjustments may come into question, the resilience takes over with players like Jacobs, Carr, and Harris able to make impact plays in crucial moments.

What are the Raiders? 3-2 and Intriguing

The Raiders are one of the more intriguing teams at 3-2. They have terrible blowout losses to the Minnesota Vikings and Kansas City Chiefs, but that seems part of the learning and growth process. The resilience and physicality of this squad should keep them competitive in most games.

Like a good budding business, the Raiders have seeds of promise that could lead to a bright future. Gruden commended Waller’s blocking skills—a wide receiver converted to tight end in a full-time role for the first time in his career. As rookie fourth-rounders, Crosby and Moreau have flashed in moments. After a quiet start, Hurst broke out with a two-sack performance and a curtain call.

The Raiders haven’t used youth and inexperience as an excuse for missteps. Now, 3-2 headed into a bye week, several players seem ahead of schedule in their individual development stages as noted above. If the trend continues to point upward over the next few weeks, the Silver and Black will play meaningful December games with playoff implications.